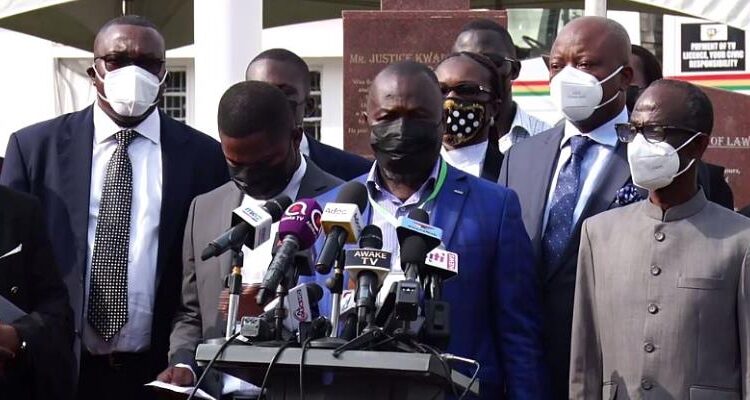 The former deputy Attorney General Dr Dominic Ayine has publicly retracted and apologised for his slanderous comment against the Supreme court.

“I am here this evening in respect of the remarks that I made to you on February 16, 2021, after court proceedings. Those remarks were widely publicised by the media. I have looked at what I said that day and have come to the conclusion that I went over board.

“I crossed the line with respect to the remarks that I made in terms of attributing inappropriately to the Supreme of the Republic of Ghana and I just wanted to let you know that this morning, I delivered a letter to his Lordship, the Chief Justice offering an unqualified apology to the court.

“I reflected on that day and realised I had crossed the line, I wish to unreservedly apologise to the court as well as the justices who sat on that day. There was no intention on my part to impugn with integrity, I was just expressing a sentiment with respect to the ruling on that day and I want to render an unqualified apology.

Dr Ayine promised not to repeat the same mistake and vowed to be of good behavior going forward.

His apology comes after the Supreme Court ordered him to publicly retract and apologize for his contemptuous comment.

The court presided over by Chief Justice Anin Yeboah gave the former deputy Attorney General and senior member of the bar, three days to render the apology.

The Member of Parliament for Bolgatanga East was directed to use the same televised medium to apologize before Thursday, February 25, 2021.

“We don’t want anything from him, he should go back to the media and retract the statement that he made. We have indeed seen the letter of apology from the contemnor but he must do so using the same medium,” the CJ said.

In a  post-hearing address to the media, Dr. Ayine accused the justices of having a pre-determined mindset against the petitioner.

“These are all germane issues under the constitution and laws of Ghana, to reduce the petition into a single issue petition is rather unfortunate and smacks of a predetermined agenda to rule against the petitioner in this matter,” he said.

Cautioning him in court today, Chief Justice Anin Yeboah said although the court will not fine or punish the Member of Parliament, it was important to take some necessary action to serve as a deterrent to other team members who may be towing the same path.

“We, however, order that the contemnor purges his contempt by retracting the scandalous statements on the very same medium before Thursday when the court will reconvene to hear the contempt case,” the CJ ordered.

Counsel for the former deputy Minister of Justice and Attorney General assured the court that his client had taken a cue from the advice of the justices, and would not repeat such again.