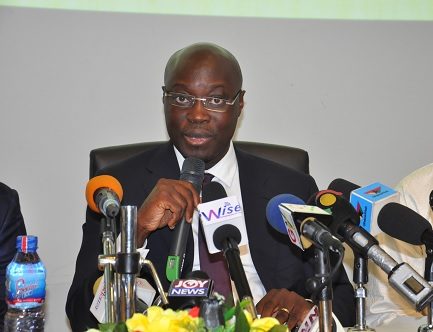 A former deputy Minister of Finance, Cassiel Ato Forson, has denied authorising payment for the procurement of some 200 ambulances, which caused the state to lose €2.37 million.

Mr Forson and two others have been dragged to an Accra High Court over the transaction between 2014 and 2016, but he has denied any wrongdoing.

Mr Forson, who is also the Ajumako Enyan Esiam MP, is in court with Sylvester Anemana, a former Chief Director of the Ministry of Health and Richard Jakpa, a businessman.

But at a presser on Friday, 24 December, Mr Forson said the allegations against him is only an attempt to silence him because of his unrelenting stance against the proposed E-Levy bill.

Describing the said charges as frivolous and politically motivated, the legislator insisted that he did not authorise payment for the procurement of the said ambulances.

“It should be noted that I, Cassiel Ato Forson, did not authorise payment for the said €2,370,000. But my only job in the entire transaction was to request the issuance of letters of credit on the authority of the Minister responsible for Finance at the time.

“A letter of credit was only a guarantee that a buyer’s payment to a seller will be received on time and for the correct amount. And in the event that the buyer is unable to make a payment on the purchase, the bank will be required to recover the full or remaining amount of the purchase.

“Letters of credit are not payment. I did not authorise payment,” he insisted.

Mr Forson has, therefore, thrown a challenge to the government to provide evidence proving that he indeed authorised payment for the purchase of the said ambulances.

“Unless somebody tells me they don’t understand the meaning of letters of credit. It is just a guarantee and not a payment by itself.

“In fact, in the letter of credit that was issued, someone had to authorise that payment and certainly not me. At the right time, we’ll make sure that document is made available,” he added.

PRESS CONFERENCE BY THE HONOURABLE CASSIEL ATO FORSON, RANKING MEMBER ON FINANCE OF THE PARLIAMENT OF GHANA ON THE ABUSE OF PROSECUTORIAL POWERS BY THE ATTORNEY GENERAL

Ladies and Gentlemen of the Press, I have had to call you this morning for the singular purpose of responding to the news doing the rounds on social and mainstream media that certain charges have been preferred against me by the Attorney General of the Republic, the Honourable Godfred Yeboah Dame. Though I am yet to be formally charged in court, I have seen copies of the charge sheet in the media and wish to say without any fear of contradiction that these charges are nothing but a frivolous and politically motivated attempt by President Nana Addo Dankwa Akuffo-Addo and his hatchet man, the Attorney General, to silence me for performing my duties as the Ranking Member on the Finance Committee of the Parliament of Ghana. But I want to assure the good people of this country, especially my constituents who elected me to represent them in Parliament, that I will not and cannot be silenced by the blatant abuse of prosecutorial powers by the Attorney General.

The investigation into the purchase of the ambulances, which is the basis for these frivolous charges, started in somewhere 2017. In November 2017, a request was made to the then Speaker of Parliament, the Rt. Hon. Aaron Mike Ocquaye, for me to assist the Economic and Organized Crimes Office (EOCO) with their investigation into this matter. I provided a statement to the EOCO detailing my honest recollection of the transaction. Interestingly, nothing was heard of the investigation until November 2021, a period of four years, when I started raising concerns about the 2022 Budget and Economic Policy of the Government. During this period, the Secretariat of the Rt. Honourable Speaker informed me that the EOCO had requested that I be released to assist with further investigation into the purchase of the ambulances. I was further informed that the Office of the Attorney General had requested that a charge statement be taken from me in preparation for formal charges to be filed against me. The coincidence speaks volumes about the motivation for these frivolous and baseless charges.

A cursory reading of the frivolous and politically motivated charges shows that my only role in the entire transaction was to have signed a letter on behalf of the Minister of Finance, in my capacity as Deputy Finance Minister, for the establishment of letters of credit by the Bank of Ghana and for payment by the Controller Accountant General of the charges for the letters of credit. If I may ask, ladies and gentlemen of the press, since when did ministerial instruction for the establishment of letters of credit become a crime in this dear country of ours?

I must point out that the instructions of the Ministry of Finance for the establishment of letters of credit was preceded by a well written opinion of the Attorney General in an opinion letter dated May 9, 2014 advising the Ministry of Health on this transaction. It was based upon the advice of the Attorney General that the Legal Division of the Ministry of Finance advised the Minister of Finance, not the Deputy Minister, to take steps to establish the letters of credit . At the appropriate time, and in the course of the trial, we will make available the full complement of documentation through the process of discovery. In the meantime, the question you should be asking the Attorney General and his Director of Public Prosecutions is why they are running away from their own legal opinion? Don’t they know that it is highly unethical and unprofessional for a lawyer to issue an opinion on the position of the law on a matter and then turn around to act against her own advice? I dare say that that is professional misconduct.

It should be noted that, I did not authorise payment for the said 2,370,000 Euros, My only job in the entire transaction was to request the issuance of LC (Letter of Credit) on the authority of the Minister of Finance, A letter of credit is letter from a bank guaranteeing that a buyer’s payment to a seller will be received on time and for the correct amount. In the event that the buyer is unable to make a payment on the purchase, the bank will be required to cover the full or remaining amount of the purchase.

May I take this opportunity to thank you for coming to this press conference and to once again assure the good people of this country that neither myself as the Ranking Member on Finance nor the NDC Minority Group will relent on our fight to ensure that the feet of this profligate Government is held to the fire. We will stand firm and protect the people of Ghana from misrule and poor economic policy choices. Not even a million prosecutions will stop us in our quest to ensure accountability and transparency in the management of our public finances.

Thank you and God bless our homeland Ghana.