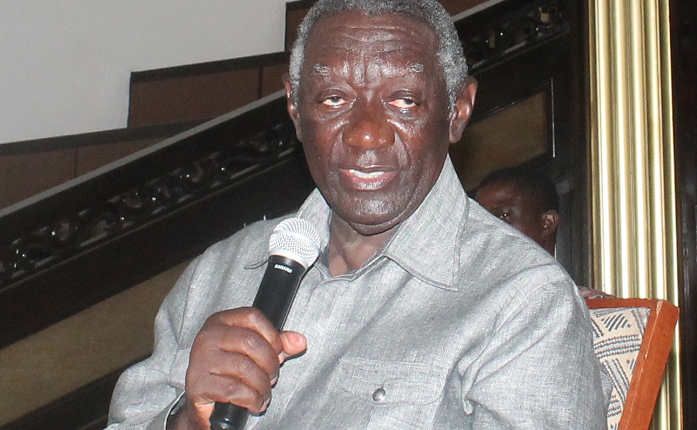 I don’t issue permits for developers – Kufuor to Rawlings

Former president Kufuor is dismissing claims by his predecessor, Jerry John Rawlings, that he supervised the building of hotels and luxury apartments in waterways in the capital, Accra.

Spokesperson for the former president Dr Kwabena Osei Adubofour denied that the so-called hotels were on waterways.

“Who said they were on a waterway? They must have gotten their permit form the Accra Metropolitan Assembly…Kufuor doesn’t give permits [for people to put up buildings]…who builds in Accra and goes to the president for permits?” he quizzed.

He said this on Thursday when the Ghana Journalists Association (GJA) paid a courtesy call on him.

“The Kufuor one, those Villagio villages and those things built in waterways…so if he can do it why can’t others do it…build their houses and factories on the southern side of the motorway where it blocks the waterway?” furious Rawlings quizzed.

A section of the Accra to Tema motorway flooded on Monday following torrential rains that hit parts of the capital.

Vehicular movement on both sides was halted momentarily, as the portion of the road around OLAM Ghana factory was covered by floodwater.

A number of vehicles also broke down forcing their drivers to walk through the water on the road which was at window level for some of the smaller cars.

During a speech to mark the 4 June 1979 uprising this year, Mr Rawlings stated that he has no regrets demolishing a $5 million hotel which belonged to entrepreneur and Executive Chairman of the Dara Salaam Group, Yusif Ibrahim decades ago.

He said the property was built on a waterway and that if given the opportunity, he would even clear other structures along with the hotel which he demolished at the time.

“Big people, however, seem to be above the law and are untouchable. If time were reversible, I would do it again and again and I will take along their new gargantuan structures in the waterways,” he said.

But in a response to Mr Rawlings’ claims, the spokesperson for Mr Kufuor denied the two-time president ever giving permits.

Dr Adubour said once there is a department that is mandated to do that job if any individual or business entity is able to get a permit to put up whatever building, it is not for Mr Kufuor to answer.