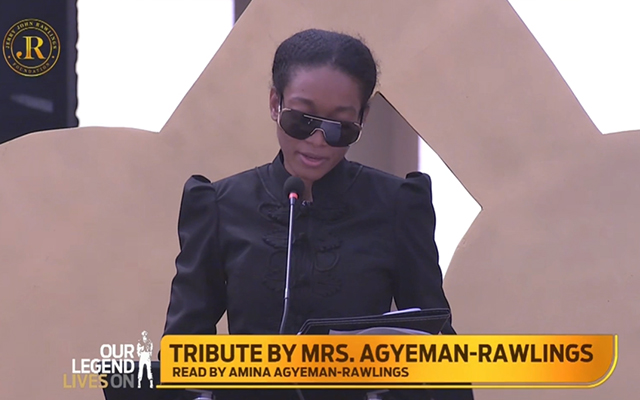 The third daughter of the late former President Rawlings, Princess Amina Agyeman Rawlings could not hold back her tears as she read her mum’s tribute to her late father.

Tasked with such a huge responsibility on the day when the entire family needed consolation, the last daughter could only pray for an overwhelming calmness to finish the task ahead.

Her feeble hands reached out to her elder sister, the Klottey Korle MP, Zanetor Agyeman Rawlings as she read the deep love shared by her parents.

“I know God created us for each other and we made a formidable team. We believe in each other and our dreams of making Ghana a country, we could all be proud of.

“You always said you did not need titles to define you and so you remained Flt Lieutenant Jerry John Rawlings. You are and always will be my Jerry, yours for Ghana and for me, I say farewell,” the part that got Amina to wobble.

The tribute also captured some challenging times, the two love birds (Jerry John Rawlings and Nana Konadu Agyeman Rawlings) had to go through.

But through the pain, tears and darkness, Mrs Agyeman Rawlings said they survived.

“The foundation of our marriage was our love for each other. The love was there through the troubled times to ease the pain away. Your caring and gentle touch helped through each day,” she indicated.

The former First Lady described the late Rawlings as a passionate individual with a big heart for sharing.

This trait, she said, was evident as her home was constantly filled with people she had never met before —  eating, laughing and chatting heartily like old friends.

Life through the political lenses

Touching on their political lives, especially after the May 15 uprising, Mrs Konadu Agyeman Rawlings said it was a tough time for the family.

She recounted days when the former president was arrested countless times by the military intelligence for an attempted coup.

The May 15, 1979 uprising was a historic trial. It was when the late Rawlings, staged his first military coup as a young revolutionary.

It was five weeks before scheduled elections to return the country to civilian rule. But when it failed, the former president was imprisoned, publicly court martialed and sentenced to death.

The late Rawlings was part of underground movement of military officers who planned to unify Africa through series of coups. They were known as the Free Africa Movement.

But things turned around after the late Rawlings explained the social injustices prompting the attempted coup, he gained the sympathy of the civilian population.

Those, were really challenging moments, but the former first lady said she learnt how to be brave.

She also said she learned how to be ‘streetwise’. Mrs Agyeman Rawlings disclosed that when she met Mr Rawlings, she was green and there was a lot she had to learn about real life, considering the fact that she had overprotective parents.

“I was innocent and you were streetwise. There was so much I did not know and understand about the real-life outside the wings and home of Mr and Mrs J.O.T. Agyeman since I had lived a very protected life under their roof.”

“I had to learn to understand how to be streetwise,” she added.

In an earlier interview before his demise in July, last year, the former President Jerry John Rawlings said after over 40 long years of marriage he could not stop ‘drooling’ over his wife, Nana, as he affectionately called her.

According to the former president, he met Nana Konadu Agyeman Rawlings at the Achimota School and since then he knew she had to be the one.

“We met at Achimota School and then she claimed I bullied her the first day we came to class, because somehow l found myself in the company of the senior ones.

“Maybe she is right, but she was special even as a young girl, and she is still special and for me, it had to be her,” he said lost between a smile and laughter.

For a man who has spent over 40 years with the woman many consider ‘the iron lady’ of Ghana politics, he said, women were worth more than a chauvinist limited worth.

“A woman isn’t there just for whatever, the kitchen and … no, no, no! Women are our partners. We must respect women enough.”

Ghana’s longest-serving President (19 years from December 31, 1981, to January 7, 2001) believes the daughters of eve anchored his long stay in office.

That military junta, the Armed Forces Revolutionary Council (AFRC) led the country for about 112 days before handing over to Dr Hilla Limann, the only president of Ghana’s short-lived the Fourth Republic on September 27, 1979.

READ: The Rawlings Timelines: The 66 events that defined J.J’s life

Rawlings governed the country as the Chairman of the PNDC for 11 years, before transitioning into a democratic leader when he won the 1992 and 1996 elections on the ticket of the National Democratic Congress (NDC).