“I never begged for a Collaboration” – Guru replies Kuami Eugene

Ghanaian hiplife artiste Maradona Yeboah Adjei popularly known as Guru has responded to claims by Lynx Entertainment signed artiste Kuami Eugene that he begged him for a collaboration.

In an interview on Adom TV recently, the “Obiaato” hitmaker revealed that he refused Guru a feature because the NKz boss disrespected Richie Mensah who is the owner of Lynx Entertainment.

“Guru did not use the right channel. You want to feature me but you go to media houses to insult the man who made me. I wouldn’t have been Kuami Eugene but for Richie so I expect that respect is accorded him no matter the differences that exist. I am under Lynx Entertainment and any song I produce needs to go through them,” Kuami Eugene was quoted to have said on a local TV channel.

Guru in his response to the comment made by the current VGMA artiste of the year made reference to his year’s experience in the music industry toppled with his achievements based on the number hits songs produced and advised the young singer to tread cautiously because he will not be under Lynx Entertainment till eternity.

He further debunked the claim made by Kuami Eugene that he begged him for a collaboration. Guru stated emphatically that he didn’t ask for collaboration from Kuami because he needed a hit song. He said he only wanted Kuami Eugene to know that he appreciates his art. 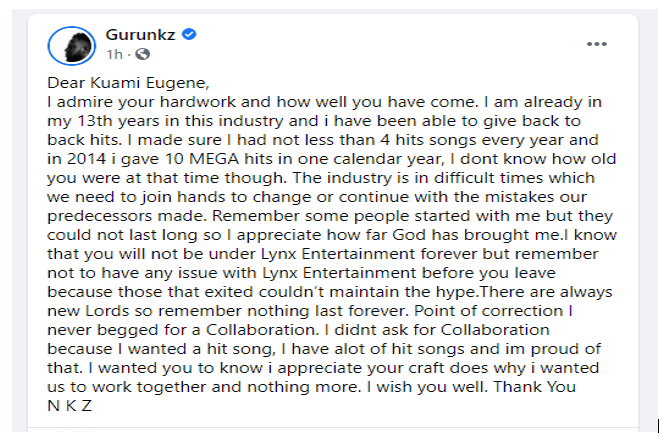 Making a positive difference for women: Working together is the panacea