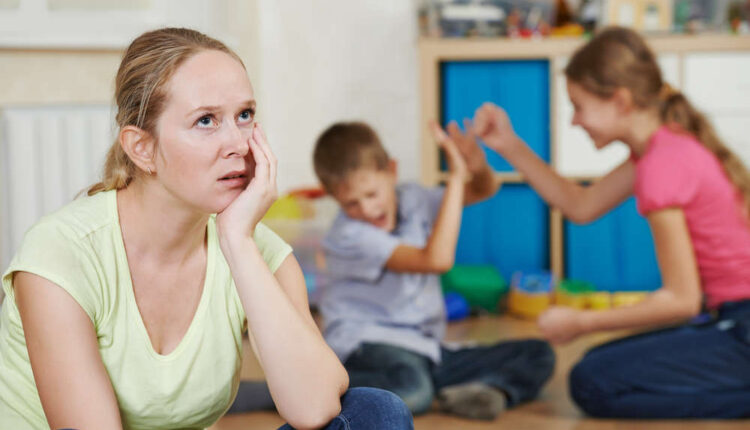 In November of 1975, the year before I was born, advice columnist Ann Landers asked her readers, “If you had it to do over again, would you have children?”

Nearly 10,000 parents replied on handwritten postcards — some of them saying things along the lines of, “I wish I never had kids.”

A few weeks later, Landers shared the survey results in an article headlined “70 Percent Of Parents Say Kids Not Worth It.”

I happened across an old clipping of this headline 23 years later. I was the proud mama of two little tots, swollen and counting down to two more, an unexpected batch of twins.

Raised as a devout Mormon, I believed it was my divine destiny to birth babies. This was what I was born to do. And so, I did it well.

The belief that I was doing right by God made my early years of parenting incredibly profound. I relished every moment.

When that Ann Landers article appeared in my life, I was a hopeful 24-year-old in the honeymoon stages of marriage and motherhood.

I wrote my own reply to the Landers poll, blasting her and her readers for selfishness. I reminded her of the perfection of holding a sleeping baby, their breath sweet with milk, the fullness of your existence wrapped up in this little one’s personal happiness.

I wept as I wrote that article and ranted against anyone who denied the wonder of motherhood.

Twelve years later, after a particularly exhausting day as a newly single mom and sole wage earner of four teenagers, I typed into Google: “I wish I’d never had kids.”

I wasn’t as much admitting to the ether that I regretted my life or that I was, indeed, regretting having kids. No. I was asking Google to help me find other mothers who felt the same way.

Hoping against hope that some other mother woke up in her mid-30s, realized her reality, and shared those shameful feelings: I wish I’d never had children.

Google has long been my crystal ball. I’ve consulted it before in times of distress.

“Do I have melanoma?”

“Do I have Alzheimer’s?”

“Should I divorce my husband?”

The panic of a moment gets poured into an attentive search engine box, sent out over the airwaves to seek connection.

Someone, anyone who understands and can tell me I’m not alone, I don’t have stage-4 terminal cancer, I probably should divorce my husband, and yes, some women regret their choice to have children, but very few are talking about it.

A huge part of me understands that mid-life moments of regret over children are a reflection of my own mess.

As a recovering religionist, I started life in one world: the world where the mother stays at home has many small children, does not seek a career, and relies on her partner to provide.

After my divorce, I made a sudden U-turn into another: the world where the woman works, provides, parents, partners, and stands up to all the same expectations as anyone else — even if she wasn’t prepared for it, educated for it, or ready for it with nest egg in the bank.

Today, I’m a single mom of four in Utah and I’m surrounded by hundreds of other women walking in the same shoes. Women who thought they were doing right by their woefully outdated religion, who married too young and had too many children (one of my friends has 9 kids!), and now face a harsh future with little education.

It’s a tough gig, motherhood, and I recognize my post-divorce reality affects my day-to-day level of happiness and certainly makes parenting even more overwhelming than it already is.

I must say: I’ve been lucky. With my own thriving business and a work-from-home career, I’m somehow making it work.

Even still, “making it work” wasn’t what I expected motherhood to be.

I thought I’d find myself and fulfillment in my marriage and kids, as so many people had promised.

Instead, here I am in the smack-dab middle of motherhood and I feel lost.

I feel time-sucked and thread worn. I feel like I’m responsible for carrying the world. And on so many days, I long for the simplicity of focusing on just one thing: me.

That sentence sounds selfish, but I’m guessing there are a million moms who understand.

Here in the middle of motherhood, I’ve spent 15 years living for (and with) my children, and I realize motherhood was as much about welcoming them into my life as it was about sacrificing myself, my time, my autonomy.

It’s a reality more of us moms need to share with non-moms.

Because understanding the reality is the only way to help non-moms answer the question they’ve been Googling: “Will I regret not having kids?”

In my most aware moments, I realize I’m not necessarily struggling against motherhood.

I’m struggling against all motherhood has become. It is a veritable meritocracy, working most “ideally” for those lucky enough to have money, time, family support, and a devoted partner.

Even then, it’s my observation that very, very few couples survive the shift into parenthood over the long term.

It changes who you are as a woman.

You are less a partner and more a caregiver. Your family life becomes your real life. Child care becomes your full-time job, minus the paychecks.

There is a constant balancing act that will have to be done for the rest of your life. And that balancing act is hard. It tears at your soul. It wears you out.

Don’t get me wrong, I love my kids. I don’t feel resentment toward them; my children increase my happiness and are my life satisfaction.

Today, women are held responsible for an impossible balance between work and family and self. I think it’s vital mothers talk about reality as it is or as it can become. Even when you’ve begun with the best-laid plans.

Over a Sunday plate of waffles several weeks ago, I was boohooing to my boyfriend (who never had children of his own) about my busy life. How I feel pulled in so many directions, incapable of focusing on any one thing, and totally exhausted.

He looked at me for a moment, then said gently:

“Your life is so full of purpose, you feel lost in it. My life has been so full of me, I’ve spent years trying to seam together some semblance of purpose: planning trips and activities, creating excursions with friends. But in the end, it’s forgettable. I have this space to share, and when I share it with you and the kids, the moments build on each other and become a link of memories, with people that would miss me if I was gone.”

His response reminded me of this quote from Milan Kundera’s “The Unbearable Lightness of Being”:

“The heaviest of burdens crushes us, we sink beneath it, it pins us to the ground… The heavier the burden, the closer our lives come to the earth, the more real and truthful they become.

Conversely, the absolute absence of burden causes man to be lighter than air, to soar into heights, take leave of the earth and his earthly being, and become only half-real, his movements as free as they are insignificant. What then shall we choose? Weight or lightness?”

It occurs to me that I am not mourning my children as much as I’m mourning my loss of choice.

My freedom lost to some degree on the days I birthed four-round, pink cherubs — four brilliant humans who have become my dearest partners in crime. My burden, my reality, my truth.

A few months after the Ann Landers’ column was published, a Roper Poll asked the same question through a telephone survey: “If you had to do it over again, would you have kids?”

Of the randomly selected parents, almost 90 percent said that kids were definitely worth it. I wonder sometimes, which survey side told the truth?

The respondents who sent in private postcards or the ones who were asked to state their answer aloud? Or do different days just bring about different feelings? I think, probably the answer is: yes, exactly.

Do I regret having kids and wish I’d never had children?

Wishing I could go back only makes me frustrated and stuck feeling and angry and resentful. And so, I embrace Life as it is.

I take all the chaos and wonder and wildness that is my Real Life. I let go of heartache, embrace the heaviness, and enjoy the adventures my children’s lives bring into mine.

Would it have been more fun to find myself on a 9-month escape to a Tibetan Monastery instead? I’ll never know. Because four kids are waiting downstairs for me to take them swimming.

And this is life.

And it’s calling me.

9 Expert Backed Strategies To Handle Rejection From A Guy

Sorry, But Maternity Leave Is Far From ‘Me Time’