Highlife musician, Kuami Eugene, is certain he does not owe musician Guru an apology.

The disagreement between the two degenerated into personal attacks.

This happened after Guru’s team reportedly reached out to Kuami Eugene’s team, Lynx Entertainment, for a possible future collaboration.

The move took a bad turn. Though industry players intervened for truce to prevail, it was not clear if the matter had been well settled.

Guru released a diss song, ‘Who born dog’  for Kuami Eugene, but industry players have described it as needless.

Reacting to the development for the first time, Kumai Eugene said eventhough his parents were insulted in the song, he will not dignify the feud with a response.

“I will not ask him to forgive me because I have not wronged him, but I will also not respond to the insults,” he said.

“I was brought up to believe that a child does not fight with his elders. Guru is a senior brother and so I’ll not fight him, neither will I beg him for forgiveness because I have not wronged him,” he said in an interview on Okukuseku.

Kumai Eugene on May 7 wished the ‘Lapaz Toyota’ hitmaker a happy birthday on Instagram but Guru is yet to respond. 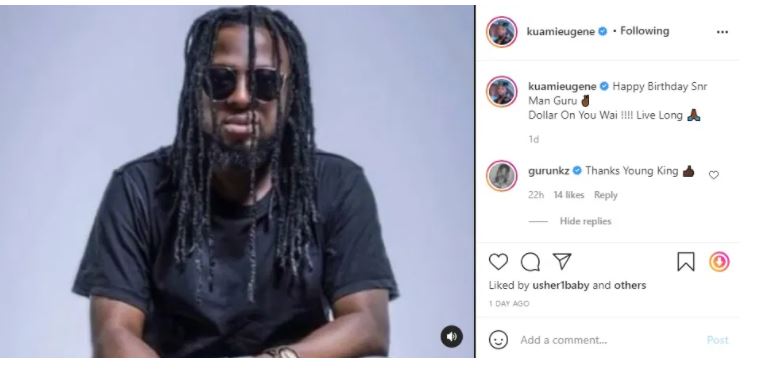