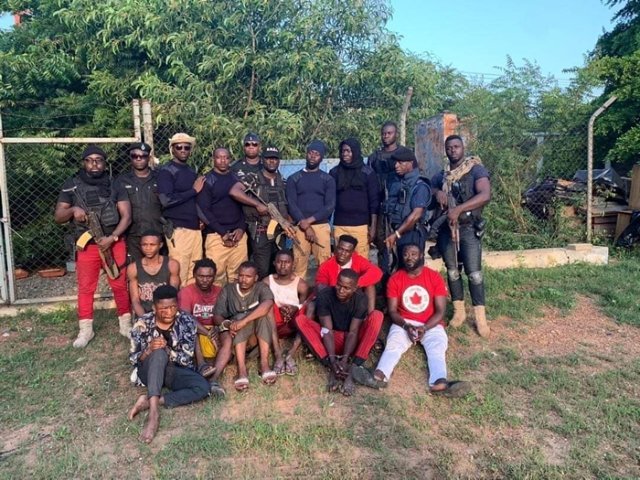 One of the suspected kidnappers who held two Canadian girls captive in Kumasi has confessed to being part of the kidnapping gang.

Sampson Aghalor, aka Romeo told the Accra High Court that he was part of the gang but is asking for forgiveness from both Ghana and his country of origin, Nigeria.

Aghalor, who has been named as the leader of the gang, however, pleaded with the court to order his transfer from the custody Bureau of National Investigations (BNI) to a normal prison.

He alleged that he had been subjected to torture in BNI.

The allegations were, however, refuted by the prosecutor, Ms Hilda Craig, a Senior State Attorney.

She stated that the allegations were nothing but an afterthought by the accused to tarnish the image of the BNI and court public sympathy.

She further prayed the court to remand the accused to assist the police with investigations.

The court, presided over by Justice George Buadi, remanded the accused persons and adjourned the case to July 15.

In all, eight people are standing trial for the kidnapping of the two Canadian ladies.

The accused persons are Elvis Ojiyorwe and Jeff Omarsar- all Nigerians. The rest are Yusif Yakubu, Abdul Nasir and Seidu Abubakari, aka Mba,Safianu Abubakar and Abdul Rahman Suleman- all Ghanaians.

They (the accused) have been accused of playing various roles in the kidnapping of Miss Lauren Patricia Catherine Tiley and Miss Bailey Jordan Chilly, two Canadians, who were in Kumasi to participate in a youth programme.

Ms Craig said on June 4, 2019, the gang, in a car, accosted the two Canadian ladies, who had boarded an Uber taxi at their hostel at Nhyiayeso, a suburb of Kumasi.

“They were accosted by the gang when they arrived at their destination and alighted from the Uber taxi. Aghalor, Ojiyorwe, Omarsar and Yakubu assaulted the victims and forced them into their vehicle amid shooting.

They then sped off with their victims to their hideout, which was in an uncompleted building at Kenyasi Krobo, another suburb of Kumasi,” the prosecutor added.

During their captivity, Aghalor contacted the families of the two women and demanded a ransom of $800,000.

Ms Craig told the court that on June 11, 2019, a National Security team, led by Colonel Micheal Opoku, and acting on intelligence, arrested Yakubu.

Afterwards, the team proceeded to arrest Aghalor, Ojiyorwe and Omarsar at their hideout at Kenyasi Krobo and rescued the two women.

The prosecutor added that Aghalor, Ojiyorwe, Omarsar and Yakubu mentioned Nasir and Abubakari as members of the gang and the two were subsequently arrested.