Inflation drops lowest in the last six months to 10.4%

The rate of increase in the prices of goods and services across the country has dropped marginally to 10.4% for September 2020 due to food prices.

The Ghana Statistical Service announced on Wednesday that inflation for September dipped by 0.2% on account of the food basket of the Consumer Price Index (CPI).

“This means that in the month of September 2020 the general price level was 10.4 % higher than in September 2019,” Government Statistician, Prof. Samuel Kobina Annim, noted.

The food basket takes into consideration the prices of food items such as maize, vegetables and cassava; as well as non-food items which include clothing, water, and electricity.

The GSS takes an average of about 307 items in the basket which represents purchasing habit of the population. Prices are collected for approximately 39,500 products every month from 44 markets.

September’s rate was the lowest since panic purchases for COVID-19 pushed inflation to 10.6% in April.

Ghana recorded its first COVID-19 cases on March 12 and a lockdown was imposed late the same month spanning up to three weeks.

Purchases around that period scaled inflation beyond single to double digits and it has remained there ever since.

September’s figure is also 0.1 percentage points lower than that of August 2020.

Food and Non-food inflation for September 2020 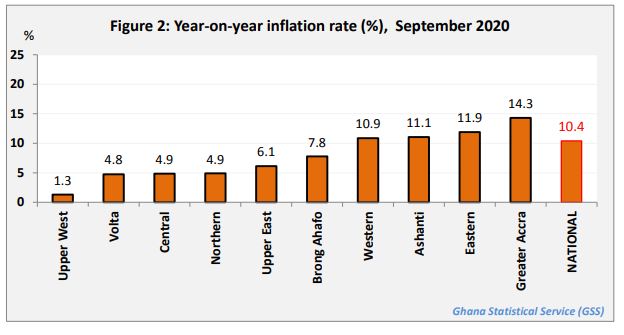 The new inflation rate is still beyond the target band of government which is 8.0 ± 2 but will be welcoming for the government as it carries more expenditures on projects as the country heads to the polls in December 2020.

A dip is also an encouragement to the Bank of Ghana (BoG) which maintained its Monetary Police Rate for the third consecutive time after reduction to 14.5% on the account of the COVID-19 pandemic in March.

A reduction is aimed at increasing the circulation of money in the system to spur economic growth but accompanied by an undesirable tendency of high inflation.

But the Governor of the BoG, Dr Ernest Addison, said the central bank acknowledged “that risks to the immediate outlook for inflation and growth are broadly balanced” before rolling out the last MPR.