The Minister for Communications, Mrs Ursula Owusu-Ekuful has charged members of the ruling New Patriotic Party (NPP) to intensify their house-to-house campaign to preach the good works of the government as well as sell its policies to the masses.

Addressing the people of Dormaa West constituency in the Bono region on Tuesday October 13, where she is on a three-day tour, she said the government has done comparatively well within 3 and half years to warrant another four years.

Mrs Owusu-Ekuful who is also the aspiring Member of Parliament for Ablekuma West noted that Ghanaians need to know the impressive record and projects dotted across the length and breadth of the country hence, the need for NPP members to carry this story to every corner of the country.

Comparing the eight years of the National Democratic Congress (NDC) into the three and a half years of the NPP, she said the NPP, as has always been its performance any time it was in government, initiates good policies and programs that develop the entire country unlike its political opponents the NDC, adding that voting for NDC would mean retrogressing.

The three-day tour of the Minister to the Bono Region forms part of an intensive campaign to secure another victory in the December 2020 polls and also her own initiative to whip up the party’s base towards victory 2020.

The Communications Minister on Tuesday visited towns like Krakrom, Yaakrom and Diabaa all in the Dormaa West constituency where she carried forward the campaign message of “4 more to do more”. 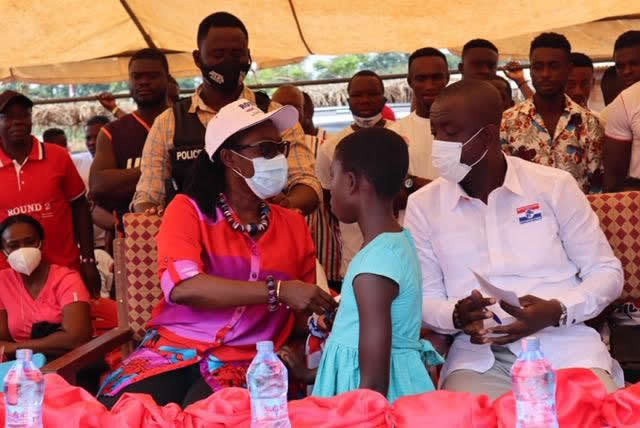 She was accompanied by the Member of Parliament (MP) for Dormaa West constituency in the Bono region, Mr Ali Maiga Halidu, the Regional Youth Organiser, Mr Abdul Razak Oppong, the Board Chairman for the National Sports Authority (NSA), Mr Kwadwo Baah-Agyeman, the Regional Women’s Organiser, Mrs Ama Amponsah and other party executives.

Mrs Owusu-Ekuful also used the occasion to introduce the parliamentary aspirant for the party to teaming supporters who had gathered to witness the event.

She urged the people of Dormaa West constituency to vote for the NPP Member of Parliament (MP) for more development to be done in their constituency.

The Board Chairman for the National Sports Authority (NSA), Mr Kwadwo Baah-Agyeman on his part advised the people of Dormaa West constituency not to vote based on religion or tribalism adding that “we vote for progress and development.”

“Vote for the government that will change and improve your lives. Vote for NPP massively to show appreciation for the good work done within the three and half years,” he said.

The tour of the Bono Region follows on the heels of similar visits by the Minister to the Upper East Region and the Oti Region, where she has toured some constituencies to help garner votes for the NPP in the up-coming general elections.

Her visits to these regions as reported earlier, are said to have rejuvenated party activities in the various constituencies as the Minister makes the extra effort go to places where many politicians have dared to go.

‘I suspect my son was poisoned’ – Mother of deceased suspect in…