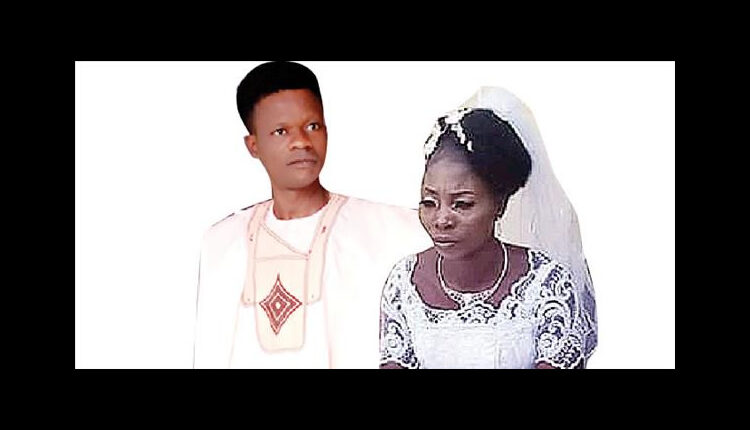 Thirty-six-year-old Akinjide Olusegun, husband of late Mrs. Kehinde Olusegun, a 34-year-old Nigerian mother of two who was killed during the violence that erupted in Ire-Ekiti, Oye council area of Ekiti State following the cancellation of the Ogun Onire Festival, tells ABIODUN NEJO that his wife was shot dead where she had gone to buy local rice

Tell us about yourself?

My name is Akinjide Olusegun. I am a native of Ire Ekiti in Oye Council area of Ekiti State. I will be 37 years old in November.

What about your wife?

She was Mrs. Kehinde Olusegun, nee Ayeni. She hailed from Ire-Ekiti as well. We got married on November 24 and 25, 2019. We dated for 13 years before we got married. We met in secondary school and started our relationship then. But our marriage was made official last year. She would have been 35 this year.

How did her death happen?

When we woke up in the morning of Monday, August 10, I initially wanted to go to the farm, but I was weak, so I decided not to go. My wife said she wanted to go and buy local rice. We (she, our two children and I) left for our family house. She took with her a basin, a sack with which she wanted to buy the rice and N50,000. Her brother was the one who gave her the money to buy the rice for him. We were at the family house when she went to meet the customer. It was while she was outside discussing with her seller, who had earlier called her to come and buy the rice, that she was shot dead.

Who was responsible for the killing?

I was told that it was one of the policemen that the king of the town invited from Ado-Ekiti, the state capital, to protect him that shot her dead while she was discussing with the rice seller.

Was she shot at or it was a stray bullet?

But the police said the two persons who died were clubbed to death by the factional groups and not due to gunshot injuries?

There is no way the police can defend this. My wife was shot dead. The second person was shot dead as well. Even the third person, who, according to eyewitnesses, escaped death, was hit by a stray bullet.

Why do you think your wife was shot at?

She went to buy rice. She was not a troublemaker but an easy-going and peace-loving person. What I heard was that it was one of the policemen invited by the king from Ado-Ekiti that shot at her.

Is it true that your wife was pregnant?

She was one month pregnant. She explained to me last week that she had missed her monthly period for upward of three weeks.

Are your two children twins?

No. Our first born is a nine-year-old boy, while the second is a six-year-old girl.

How do you feel about your wife’s death?

I never imagined something like this could ever happen to me in life. It never occurred to me that my wife could die this way. I never dreamt a calamity like this could befall me.

How has life been since the incident occurred?

I have not been myself since then. I have been contending with memories of her lovely and kind behaviour. She never for once made life unbearable or regrettable for me. Whenever I did whatever she asked me to do, the result was always happiness for me. An instance was when she called me in 2018 that we must build a house. It was the following week that God made a way for the realisation of the project. On completion of the house last year, she told me that we should formalise our wedding and we did it successfully. Even last week, our focus was on the necessary accessories for the finishing of the house. These and other things have been on my mind since she was killed.

She was fond of helping me, assisting me to work. She was hard-working. I have been reflecting on these and more since she was killed. The result has been tears. I have not recovered. I find it difficult to sleep. It was only on Wednesday that I could sleep for some hours. I have been thinking. I cannot stop thinking about the two children she had for me. I cannot but think of how I will take care of the two children alone without their mother. It is the reverend father of our church who has been consoling me.  I don’t know how I will cope without her.

What will you miss most about your late wife?

I will miss her soothing words, her positive advice, how tenderly she took care of my children and how she focused on our future. I will miss the happiness I always had when I saw her dress up. She was very good to my mother. I will miss her love for my family.

When she told you last week that she was pregnant, what did she tell you were her plans for the unborn baby?

Our plan was that the baby would be our last child. She had even bought and kept some of the needs of the unborn baby in her wardrobe. It was her plan that we would have only three children and give them the best of what we could afford.

What were her unfulfilled plans in life?

One was that she wanted us to do the proper finishing of our house to make it befitting this year; and another was that, by next year, we would both have bought our cars. She also wanted to open her hairdressing shop. Her plan was that if she was able to open the shop, we would be able to train our children to the best of our ability.

What do you do for a living?

I work in a private school. My wife’s plan was that when we put things together, I would be able to quit teaching and start a business that would boost the family’s income. I teach at Our Lady of Fatima. In addition, I am into some petty jobs such as bread-baking, farming and decorations.

Was your wife in any way connected to the Ogun Onire celebration or crisis?

She had no business or interest in anything like that. She was the type that stayed indoors. Even since the last two weeks or thereabouts, she was always at home. At times, people asked her why she would not come out. Her plan was that it would be after the festival that she would buy the rice. But it was when her seller called her that she chose to go there. It was in the course of discussing in the house of the person that she was shot dead.

Do you have any interest in the crisis over the cancellation of Ogun Onire festival this year?

When I was growing up, I was interested in the celebration, but for about five years now, I have been a mass server in the Catholic Church and, with my other activities, I have no time and interest in it. The church even said I should be a catechist. So, for the past three years now, I have been attending school for that. These and others do not give me time to be interested in Ogun.

What is your appeal to the government on the killing of your wife?

Has the body of your wife been buried?

Yes. Her remains have been buried.