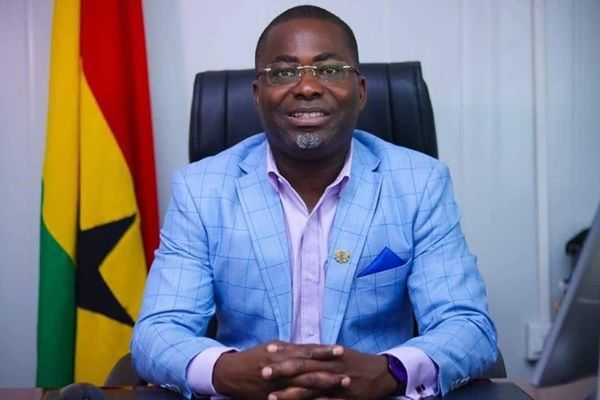 Former Secretary to the Inter-Ministerial Committee on Illegal Mining, Charles Bissue, has reacted to the claims by the National Democratic Congress calling for his prosecution in the infamous galamsey fraud matter.

Addressing the media on Thursday, the National Communication Officer of the NDC, Sammy Gyamfi, charged President Akufo-Addo to prosecute his officials who have been found complicit in illegal mining.

He said this would prove the seriousness of the President’s fight against ‘galamsey’.

“Ghanaians are tired of your flowery speeches and useless rhetoric. The so-called fight against ‘galamsey’ has been a spectacular failure, and the only way to salvage it is for you to man up and finally begin to crack the whip on your errant appointees and NPP functionaries who are neck-deep in the ‘galamsey’ business.

“We demand the immediate prosecution of all NPP functionaries and NPP officials who have engaged in illegal mining such as Charles Bissue, Chairman Wontumi, the evidence is clear, Andy Owusu, Ekow Ewusi, Prof. Frimpong Boateng among others,” he stated.

But Charles Bissue has rejected the allegations of fraud cited in the NDC Presser on the galamsey menace.

“My attention has been drawn to the scathing attack on my person by the National Communications Officer of the opposition National Democratic Congress (NDC), Sammy Gyamfi, in his press conference that responded to President H.E Nana Addo Dankwa Akufo Addo’s renewed assurance in the fight against illegal mining. In that press conference aired on various media platforms on Thursday, 6 October 2022, Mr. Sammy Gyamfi malign and traduce me by referencing a rather doctored and propaganda-induced documentary authored by Tiger Eye P.I’s Anas Aremeyaw Anas.

“Ordinarily, I wouldn’t have responded to this matter given the fact I have long been exonerated by the Criminal Investigation Department of the Ghana Police Service on this fraud allegation leveled against me,” Charles Bissue said in his press statement.

He maintained his innocence in the corruption allegations levelled against him, saying the public has been misled to accept and believe the narrative by Anas Aremeyaw Anas about the money he was seen taking in the video.

“As I have said countless times, that money was not a bribe, and I did not make any demands whatsoever from any operative or beneficiary of illegal mining while I served on the IMCIM.

“The money in question was a donation from the NPP Chairman of the Ashanti Region, Bernard Antwi Boasiako alias Chairman Wontumi, to the then NPP Western Regional Organiser, Abdul Ganiyu, for a party event organised in the Western Region.

“For the malice and character assassination that Anas and his sponsors had in mind, the public was denied the audio recordings and full disclosure of the purpose of that money handed to me.

“It was uncovered that a former employee of the IMCIM, Francis Owusu Akyaw, whom I fired for unsatisfactory conduct sponsored the video recording of the documentary.

“Francis Owusu Akyaw admitted to the Police of having commissioned that recording. His nomination for the parliamentary candidate in the Juaben Constituency was subsequently declined as a result of this.

“This same Francis Owusu Akyaw is a named beneficiary of a mining firm [DML, as named in the leaked will] co-owned by the late Sir John of the Forestry Commission.”

Anas and his TigerEye PI team in March 2019 premiered an investigative video which captured state officials, including Charle Bissue, who is also a presidential staffer, sidestepping the laid-down procedure for the procurement of mining licenses.

In the video, Charles Bissue emerged as a facilitator for a company seeking to circumvent laid down processes to be given clearance for its mining operations.

Bissue is seen receiving wads of cash to facilitate the speedy ‘clearance’ of a mining company in order that it can begin mining as soon as possible, and is heard in the video instructing his subordinates over the phone to “fast track” the processing of the company’s documents.

He is also heard in the video instructing his subordinates over the phone to “fast track” the processing of the company’s documents.

Anas and his team subsequently petitioned the office of the Special Prosecutor to investigate the matter and deal with persons who compromised their positions and hampered the President’s fight against illegal small scale mining in the country.

Mr. Bissue in the statement said although he didn’t engage in any corrupt activity, he has stepped aside pending further investigations.

The Criminal Investigations Department(CID) of the Ghana Police Service in 2019 exonerated Charles Bissue from allegations of corruption.

After thorough investigations, the CID, in a final report, concluded that Mr Bissue did not circumvent the laid down procedures of the IMCIM to favour ORR Resource Enterprise, the company at the centre of the incident.

The CID also concluded that the documentary which was aired was not a true reflection of what transpired between Bissue and the said Yaw Ben of ORR Resource Enterprise.

“The CID investigations primarily relied on documentary and other sources, as already indicated, but the lead investigator of the Tiger Eye Documentary, Mr Anas Aremeyaw Anas, failed to avail himself to assist in investigations and also failed to provide a copy of the unedited version of the documentary,” the report said.