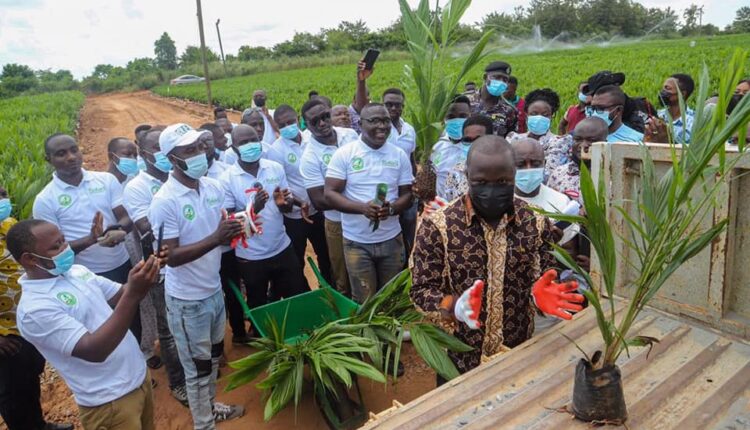 The project is aimed at providing alternative livelihood to illegal miners

In support of the government’s fight against illegal mining (galamsey), the Ministry of Lands and Natural Resources has unveiled a four million hybrid oil palm planting project.

The project, launched at Atikwatiakwaso in the Eastern Region on Wednesday, May 26, was also in support of the Green Ghana Project.

It is aimed at providing alternative livelihood to those who engage in illegal mining.

Speaking at the programme, the Sector Minister, Samuel Abu Jinapor, said planting more economic trees would be a major source of alternative employment to galamseyers.

According to him, the government’s effort in curbing the menace required that the energies of “our young ones who engage in illegal mining are redirected into sustainable livelihoods activities such as oil palm plantations.”

“This is also to ensure that mining communities do not become ghost towns even after cessation of mining,” the minister said, adding that the government was not against small-scale mining, rather, illegal mining.

Mr Jinapor was worried about lands that have been destroyed and depleted in Southern Ghana because of galamsey.

He underscored the importance of land custodians in mining communities to fight against the menace and implored them to be relentless in the anti-galamsey campaign.

Beginning June 11 this year, the government intends to plant five million trees in a day across the country under the Green Ghana Project to increase the country’s forest cover and preserve the environment.

The minister stated that the exercise would commence with President Akufo-Addo, the Speaker of Parliament Alban Bagbin, the Yaa-Naa, and Chief Justice Kwasi Anin Yeboah.

The Committee, chaired by former Deputy Ministry of Lands and Natural Resources Minister Benito Owusu Bio, would operate through four Sub-Committees; Finance, Operations and Logistics, Publicity and Protocol, and Monitoring and Reporting.

President Akufo-Addo has made a strong case in a related development to support the destruction of equipment that was ceased by the Operation Halt team fighting galamsey.

At a sod-cutting ceremony for the construction of a Law Village Project in Accra Wednesday, May 26, the President stated that it was illegal for people to mine at a 100-metre radius of water bodies due to pollution.

He said, “I know there are some who believe that the ongoing exercise of ridding our water bodies and forest zones of harmful equipment and machinery is unlawful and, in some cases, harsh.

“I strongly disagree, and I would advise those who take a contrary view to go to court to vindicate their position if they so wish. That is what the rule of law is all about,” President Akufo-Addo added.

In 2017, the President launched Operation Vanguard, a joint Military and Police Task Force to combat the operation of galamsey in Ghana.

In a renewed exercise, the President deployed about 200 military personnel to flush out illegal miners destroying water bodies in the country in the first phase of the Operation Halt campaign.

The second phase of the Operation Halt has seen about 400 personnel sent to illegal mining sites across the country with focus on the tributaries of the Pra River, which have, also been significantly affected by the activities of illegal miners.

So far, more than 500 pieces of equipment have been destroyed as part of Operation Halt, to end illegal mining.

I Got GH¢27m For Business Promo – Ato Essien