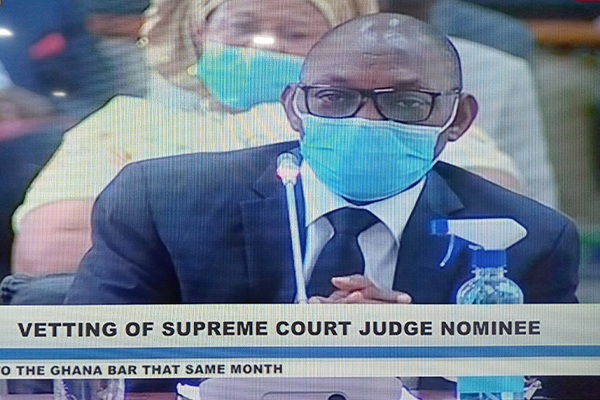 A question to a Supreme Court nominee,Justice Clemence Jackson Honyenuga, over a speech praising President Nana Akufo-Addo caused a stir on the Appointments Committee of Parliament.

That speech was in February 2020 at a durbar of chiefs and people of Nyagbo while the president was on a three-day tour of the Volta and Oti regions.

It proved controversial with veteran journalist and government insider Kwaku Baako urging the president to “drop” Honyenuga after he was nominated to the Supreme Court last March.

At his vetting in parliament, North Tongu MP, Mr. Samuel Okudjeto Ablakwa, ran the nominee through the code of conduct for judges and pointed out the judiciary’s position on political comments by judges.

But before his question could be answered, the chairman of the Appointments Committee, Joe Osei Owusu, intervened, and ruled it out.

He explained that the MP’s question had already been asked and answered.

Visibly displeased, Minority MPs on the committee murmured, criticising the ruling. The Minority leader, Haruna Iddrisu, who is a ranking member on the committee said committee members have the right to ask follow-up questions on matters already asked by other MPs.

Haruna Iddrisu called for a meeting of the leadership to re-evaluate the ruling while almost all NDC MPs walked off the committee.

The question relating to the political comment had been asked by Titus Glover who wanted to give the nominee the opportunity to explain circumstances surrounding his controversial endorsement of the President.

The nominee explained he was misreported by the Daily Graphic. He said the national daily newspaper reported he had invited the president to his traditional area, which he said was not true.

He said he spoke at a durbar of chiefs and his speech was on behalf of all the chiefs and people of Afadjato South traditional areas.

When the nominee suggested he were misreported, Samuel Okudzeto Ablakwa would strike again at the issue in much more details.

Mr. Ablakwa then pointed out that under Rule 6 of judges’ code of conduct, judges are not to “publicly endorse or publicly oppose another candidate for political office.”

The relevant portions of the controversial speech is reproduced as follows:

“We wish to congratulate you for the excellent manner you are governing this dear country of ours, it is our hope that with your vision and the gains made in your first term, Ghanaians may consider giving you another four years” Justice Honyenuga, whose stool name is Torgbui Ashui Nyagasi V, told the president at a durbar of chiefs and people of Nyagbo. The president was on a three-day tour to the Volta/Oti regions last week.

Ablakwa said; “I intend to take off from the matter in controversy raised by my colleague Hon. Titus Nii Glover. I am quite surprised that you are suggesting that the Graphic misreported what you said but the video of what you did say at the durbar of 18th February 2020 which I have transcribed, you stated and I quote: ‘It is our hope that with your vision and gains made in your first term Ghanaians may consider giving you another four years.’ These are your exact words.

“My Lord, if you would come with me to the Code of Conduct for Judges and Magistrate. Specifically rules 1,2, 5 and 6.

(a) Act as a leader or hold an office in a political organisation;

(b) Publicly endorse or publicly oppose another candidate for political office;

(c) Make speeches on behalf of a political organisation;

(e) Solicit funds for a political organisation or candidate, or purchase tickets for political party dinners or other functions.

“My Lord, please don’t answer yet. I am refusing to admit this question because he has explained that he was reading a speech of the traditional area. He was nominated to read the speech on behalf of the others…I am refusing to admit the question because he has said that he read the speech of the area he represented and for that it would be difficult to pin that to him as a personal opinion.”

Haruna Iddrisu called for a meeting of the leadership of the committee over the controversial ruling. National Democratic Congress (NDC) MPs temporarily walked out to consult.

Haruna Iddrisu returned to announce that the Minority would challenge the chairman’s ruling.

Tamale North MP, Alhassan Sayibu Suhuyini , would return to the controversy again, pointing out that the nominee in his speech expressed a political judgment on the Akufo-Addo presidency and also expressed an expectation of the president’s re-election.

The nominee explained that his speech was a “normal” practice of chiefs to praise presidents as a way to attract development to their areas.

“Our understanding was that we were wishing him well. This thing has been happening all over the country for years since colonial times,” he said.

He said if any group had been affected or their political fortunes affected by his comment, he was sorry.

“I am sorry just forget about it,” he said.