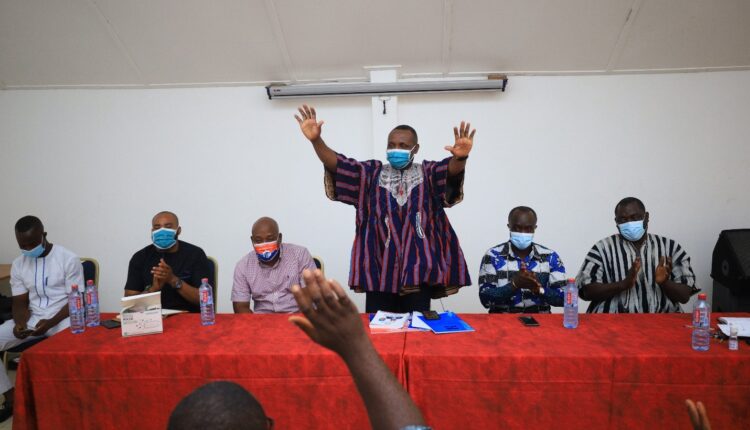 To prepare the way for this, the General Secretary has begun a ‘thank you and familiarization tour’ of the party, acknowledging the sacrifice that ensured the re-election of President Akufo-Addo.

‘Since our hard-fought victory in 2020, we have not yet had the opportunity to convey thanks to those who really matter, which is you, the grassroots,” he said. “I am here to let you know that your sacrifice is not taken for granted. And I am here to take first-hand feedback on your concerns about the 2020 general elections,’ he said.

The tour has seen Mr Boadu hold meetings in Ahafo, Bono East, Ashanti, Western regions. At the latest meeting in Ho, stressed that it is too early for communicators to be taking sides in the upcoming presidential primaries.

He explained that the only guarantee for victory in 2024 is the success of the Akufo-Addo government’s second term.

The party must be ready to take advantage of the goodwill the NPP enjoys among Ghanaians by maintaining well-oiled party machinery that can turn this goodwill into good votes, he explained.

He said for this to happen, individual interests must not be encouraged to cloud the party’s focus, and therefore key party stakeholders such as communicators must focus their attention on propagating the work of the Akufo-Addo government.

Mr Boadu announced that the NPP’s immediate task is the upcoming registration exercise of party members.

Mr Boadu reserved praise for the entire Volta regional branch of the party for finally breaking through to win an NDC stronghold seat, Hohoe, won by John Peter Amewu.

It was the only seat won by the NPP in the 18 constituencies of the region.

Teenage pregnancy cause of unemployment – NPC