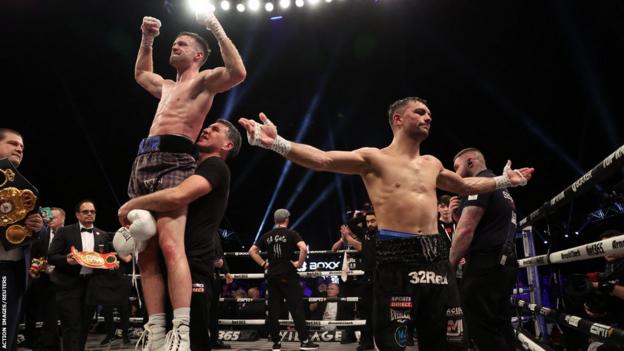 Josh Taylor says “it’s absolute nonsense” to suggest he is ducking a rematch with Jack Catterall.

A return to Glasgow for a rematch was set for 4 March, but a foot injury sustained by Taylor has caused the bout to be postponed.

“I’ve made a lot of sacrifices to make this fight happen,” Taylor tells BBC Scotland.

“People saying I’m scared and this and that, it’s absolute nonsense. If I was scared, I wouldn’t have been undisputed world champion. I’m scared to fight no-one.”

Taylor, who believes the Englishman would lose to anyone in the top 10, pointed out he was under no obligation to fight Catterall again.

“I turned them down to do this and prove that was just a bad performance and I am still the best fighter on the planet in my weight class.

“Boxing fans are quite fickle. They’re quick to forget.”

Taylor tore the plantar fascia tendon in his foot while training for the rematch.

The injury will prevent him training for six to eight weeks and the Scot has identified late May or early June as a possible target to return to the ring.

There is doubt as to when and, indeed, if the rematch will eventually take place.

The first fight against Catterall is Taylor’s only bout since he became undisputed lightweight champion of the world with victory over Jose Ramirez in May 2021.

But he believes he is destined to fight the 29-year-old Englishman again.

“I don’t think the fight is going to go anywhere,” he adds. “I wouldn’t expect Jack to sit around and wait for me to get better.

“He’s got a career to pursue as well. I would expect him to go and try and get another fight for the time being.

“I think the interest in that rematch will always be there as long as we’re both still winning and he doesn’t get beaten by anyone.

“I think, if he boxes anyone in the top 10, the guys I’ve boxed previously, he gets beaten off them. Even then, I still think that rematch is still there at some point because there will be interest in it.”