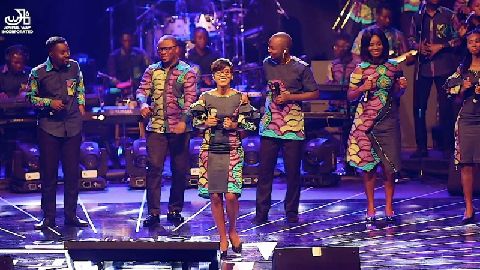 The Joyful Way Incorporated (JWI), originally “Joyful Way Singers,” officially commenced the celebration of its 50 years of making an impact in the gospel music industry.

The celebration is on the theme, “Joyful Way at 50 – Our Story, Impact and Legacy.” The Group, which is an evangelistic ministry is known for composing songs.

“Jesus, Thank You”, “Osee Yie”, “Begye Wo Ayeyi”, “W’aheni to Rentwa”, “Osabarima”,“Wonjie Oyi”, “I’ve Found It”, “Never Give Up”, “Barima Yesu”, and “Guanhwefo,” are some of the Group’s popular songs out of 120 from 15 albums, which have become part of the traditional praise and worship repertoire of the church in Ghana.

Mr Samuel Ewool, Chairman of the Board of Directors of JWI, at the launch in Accra, said aside using contemporary songs as a tool of evangelism to Senior High Schools, churches and communities across the world, the Group also demonstrated the love and compassion of Christ through many other ways.

The story of the evolution of charismatic churches could hardly be narrated without the mention of the role of JWI, he said.

Mr Ewool said Joyful Way was key in introducing modern day musical instruments such as guitars and drums into churches when they were considered unacceptable, and had nonetheless, impacted several youth and nurtured them into becoming responsible citizens in their fields of endeavour.

The celebration, he said would be marked with activities and programmes such as internal and external conferences and discussions on issues on gospel music ministry.

There would also be school concerts and crusades, launch of history book, songbook, video documentaries, 50th Anniversary music album, and commissioning of the Group’s legacy projects with a thanksgiving -“Explosion of Joy Concert” and fundraising dinner climaxing it.

Mr Ewool said the lyrics in many of their songs had brought hope, restoration, joy and salvation to many hearts and transformed millions, some becoming pastors, marriage counselors, evangelists and minstrels.

“50 years on, the adventure on this Joyful Way has been exciting and fulfilling, laced with humbling stories and experiences worthy of sharing and also drawing lessons from our impact and legacy,” he said.

Mr Stephen Otoo, the President of JWI, expressed joy and contentment over how much the passion and exuberance of joyful student singers from 1972, grew.

He said the Group had lived beyond what had been entrusted to them, gone the extra mile to live up to expectation, and restored hope to those who came across their ministry.

Joyful Way Incorporated was born 50 years ago in Cape Coast when a group of teenage students heeded to their call to establish the group out of an initial group they had formed dubbed: “Noise of Joy”, “The Evangels”, “The Hopefuls”, and “Calvary Victory Voices” among students of Mfantsipim, Wesley Girls High School, and Adisadel College.

The Group has traveled the length and breadth of the country, the West African sub-region, Europe and the USA to preach the gospel through song ministrations.

JWI currently has an active membership 200 young men and women from senior high and tertiary institutions, full of zeal and passion for Christ and more than 500 associates who are former members of the Group, partners and patrons in Ghana and abroad.