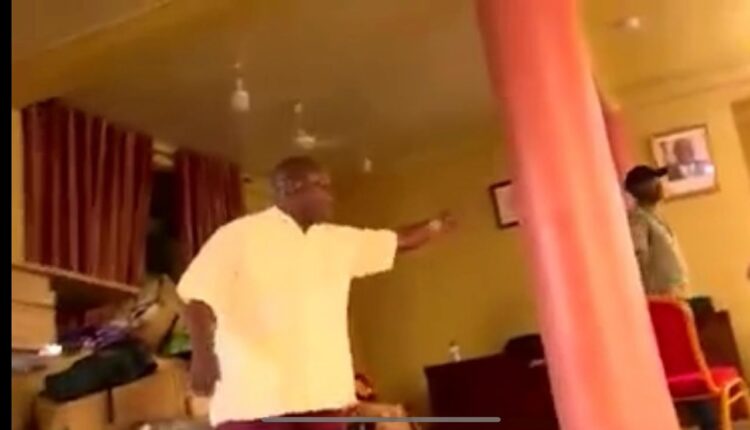 The nominee for the position of Municipal Chief Executive for Juaben in the Ashanti, surrounded with controversy after he obtained just six votes out of 26 in the first round of voting, and was seen in a video, allegedly demanding a refund of the money he paid to some assembly members for his endorsement has been slapped with 26 counts of corruption in respect of public elections by the Special Prosecutor.

Alexander Kwabena Sarfo-Kantanka wanted to be the Municipal Chief Executive for Juaben in the Ashanti Region.

He was nominated by President Nana Addo Dankwa Akufo-Addo but was rejected on the first and second occasions by the Assembly Members.

It later emerged in a video, where he was heard demanding a refund of a GH¢1000 he paid to an Assembly Member after he was rejected during the confirmation vote.

It was alleged that he paid money to some Assembly Members for his endorsement, yet they voted against him.

In the video, the rejected nominee was seen hurling insults and curses at some individuals believed to be Assembly Members.

In some instances, he was seen angrily exchanging words with some assembly members and demanding the return of monies paid to them.

The Special Prosecutor, Kissi Agyebeng took up the matter for investigation.

In a press statement dated Tuesday, May 24, 2022, and issued by the Special Prosecutor, Kissi Agyebeing, he explained that Alexander Kwabena Sarfo-Kantanka will be arraigned before the High Court in Kumasi on Wednesday, June 1, 2022 charged with 26 counts of corruption, in respect of a public election – arising out of two public elections conducted in September and November 2021 for the confirmation or otherwise of his nomination.

The facts supporting the Special Prosecutor’s case against him is that, Sarfo-Kantanka, who is a farmer and the chairman of the Juaben constituency of the New Patriotic Party (NPP) “gifted” the elected members of the Assembly GH¢5000 each ahead of the election, which was to confirm him.

He again “gifted” the appointed members GH¢2500 each, all with the intention to influence them in their duty as voters in respect of the election in his favour.

Facts to be adduced by Special Prosecutor

In July 2021, the President Nana Addo Dankwa Akufo-Addo nominated the accused, Alexander Kwabena Sarfo-Kantanka, a farmer and the Chairman of the New Patriotic Party for Juaben Constituency, for the position of Chief Executive of the Juaben Municipal Assembly in the Ashanti Region.

The evidence, according to the Special Prosecutor will establish that, circa September 2021, before the confirmation or otherwise of the accused by a public election, the accused visited the members of the Juaben Municipal Assembly in Juaben; and he gifted the elected members of the Assembly GH¢5,000 each and he also gifted the government appointed members GH¢2,500 each to influence their conduct in the performance of their duty as voters in respect of the election in his favour.

The election was conducted on September 29, 2021 and the accused failed to secure the required number of votes for confirmation as Municipal Chief Executive.

The accused was re-nominated for the same position by President Akufo-Addo on October 12, 2021.

A subsequent election for the same purpose was conducted on November 1, 2021 and the accused again failed to secure the required number of votes.

The Special Prosecutor said, “whereupon, the accused, utterly disappointed at the turn of events that his gifting of valuable consideration to the members of the Assembly to influence their vote in his favour had gone awry, went berserk and vented his wrath on the members of the Assembly and he angrily demanded a refund of the amounts of money he had gifted to them. The irate conduct of the accused was audio-visually recorded; and the recording went viral on Social Media platforms.”

The accused admitted gifting the indicated sums of money to the respective categories of the members of the Assembly to influence the outcome of the elections in his favour, according to the Special Prosecutor.

After investigations, the accused was duly charged with the offences on the charge sheet, it added.