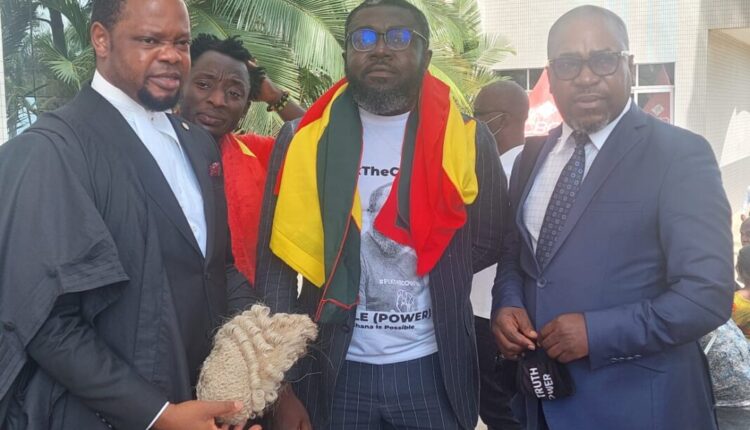 Judge orders Barker-Vormawor to remove Ghana flag around his neck

Convener of #FixTheCountry Movement Oliver Barker-Vormawor was ordered to remove the Ghana flag around his neck when he appeared before the court today.

The social media activist was at the Accra High Court Thursday morning draped in the flag of Ghana, holding a walking stick.

When his case was called Mr Barker-Vormawor walked from the gallery into the dock still draped in the Ghana flag.

But he was stopped right in his tracks by the trial judge Justice Mary Maame Akua Yanzu.

“Sir, please step back and remove the Ghana flag and fold it. Outside you can put it around your neck. Here, No,” the judge ordered.

A similar order was directed at two other persons who were also in court to offer solidarity to the activist.

Mr Barker-Vormawor and his supporters complied with the order and removed the Ghana flag before the hearing of the case began.

The social media firebrand, who is standing trial for a treason felony is accusing the government of unnecessarily delaying his trial.

Asked why the judge directed that he removed the flag, Mr. Barker-Vormawor said he had no idea the court system had a problem with the Ghana flag.

“It’s never been my understanding that the court system had a problem with the Ghana flag. But of course, when the whole democracy is so much in shambles and everybody is ashamed to identify because the sense of patriotism is low, markers of patriotism like this obviously make people uncomfortable,” he spoke to Joynews after proceedings.

Meanwhile, the Accra High Court has set October 21, 2022, to hear an application filed by lawyers of the #FixTheCountry Convener to quash the bill of indictment.

Alice Odame Koranteng, an Assistant State Attorney, informed the court that the state had filed an application in opposition to striking out the committal proceedings and the Bill of Indictment.

According to the State Attorney, the application in opposition was filed Thursday morning.

“The post contained a clear statement of intent with a possible will to execute a coup in his declaration of intent to subvert the constitution of the Republic of Ghana,” the police statement dated 12 February 2022, signed by the now-retired Director-General of Public Affairs, DCOP Kwesi Ofori said.

He was arraigned on Monday, 14 February 2022, and was charged with a treason felony. The accused pleaded not guilty.

He is currently on bail of GH¢2 million. He is also expected to report to the police once a week.