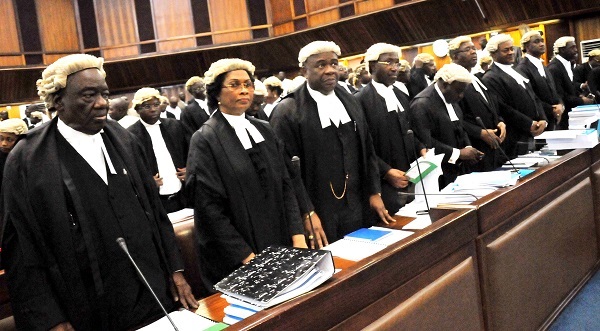 In a damning statistics on justice delivery in Ghana, theghanareport.com has found that put together, each judge in the country serves a population of more than 83,100.

For its 16 regions and 244 districts, Ghana has only 361 judges right from the lower courts to the Supreme Court.

With the country’s population estimated at 30 million ahead of the 2021 census, the ratio of judges to the population is one person to more than 83,100 people.

Justice delivery in Ghana can be long and cumbersome leaving litigants and accused persons sapped as few judges mean a heavy workload on the few.

Given the magnitude of bureaucracy and delays that mar the judicial process, it is not surprising to find this institution is probably the worst off in terms of human assets.

The Supreme Court, which is burdened with weightier issues, including interpreting grey areas of the constitution, has 15 judges.

But during her vetting in December 2019, then a Supreme Court nominee, Justice Gertrude Torkornoo, insists capping the number of Supreme Court judges will be dangerous and will tie the hands of the court as it has a vast jurisdiction.

When she appeared before the Appointments Committee, Mrs Justice Torkornoo stated that the Supreme Court was the highest court of the land and that it was the only court that could interpret the Constitution, with the unique jurisdiction of high-profile cases, such as treason.

But her recently appointed contemporary, Justice Clemence Honyenuga, argued that the court should have a maximum of 17 judges because of challenges including the judges recusing themselves.

The Courts of Appeal which handle all the appeals streaming from the lower courts has only 34 judges and two courts in Accra and Kumasi.

This means that litigants and accused persons whose cases make their way to the Court of Appeal have to shuffle between their destinations, no matter how far, to Accra in the southern sector, or Kumasi for the northern sector, often at huge travel costs.

If the data is to be broken down further, on the average, a Court of Appeal judge serves a little over 882,300 people.

Court of Appeal judges, however, sits in panels of at least three judges.

The High Court with only 118  judges, serves as the appellate court for appeals from a criminal judgment of the Circuit Courts, all appeals from the District Courts, the Juvenile Courts and the Family Tribunals.

The High Court is also the first port of call for all human right cases with additional responsibility as the supervisor of all lower courts in the country.

Its judge to population ratio is about one judge to a little over 254,000 people.

For a court that handles landlord and tenant cases, ownership, possession, occupation and title to land, applications for probate and letters of administration, original jurisdiction in all criminal matters other than treason and offences punishable by death has only 79 judges.

This means that on the average only a quarter of the country’s 244 metropolitans, municipal and districts have a Circuit court judge.

The circuit court judge to population ratio stands at a little over 483,000 people.

The reality is that most of these courts are located in cities and big towns—away from the rural folks who are the most vulnerable to human right violations.

During his vetting, Chief Justice Kwasi Anin Yeboah did not mince words when he appealed to district assemblies to help establish more local courts in the country.

According to him, most court structures, especially circuit courts, are dilapidated and need to be replaced with new edifices.

Citing an example, Justice Anin Yeboah told the committee about a court in Yendi which is close to 100 years old but gets renovated only periodically.

“…as I stated, in the case of the Yendi court, it was there for close to about 100 years. You do periodic renovations, and that’s it.”

To him, that is not enough to only renovate but add to the already existing ones noting that, “districts assemblies should know that it is their business to put up courts for us. In any case, all over the world, it is the executive which provides the judiciary with infrastructure.”

However, there are 158 magistrates nationwide.

This figure also means that there is a probability of about 30 metropolitan, municipal and district assemblies not having district courts.

While Australia’s judge to population ratio is 41 to a million population, Canada, England and the United States stand at 75, 51 and 107, respectively.