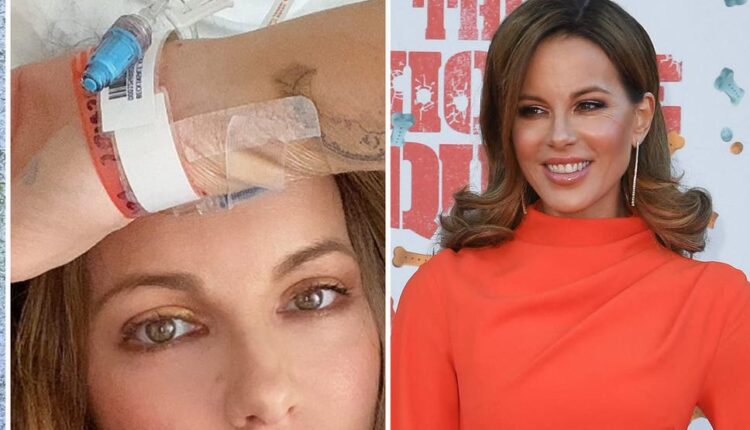 Kate Beckinsale is on the mend.

On Monday, the 48-year-old Jolt actress gave fans an update on her health, sharing a selfie on Instagram, which shows the star lying down with an IV in her arm and a hospital bracelet on her wrist.

“Feeling a lot better. Thank you so much for your kind messages and love x,” Beckinsale captioned the photo.

The update comes after TMZ reported over the weekend that Beckinsale, who has been in Las Vegas filming her new movie Prisoner’s Daughter, was taken to the hospital for a back issue.

A rep for Beckinsale did not immediately respond to PEOPLE’s request for comment.

Last week, before her hospitalization, Beckinsale shared a photo from what appears to be the set of the upcoming film. In the shot, she’s pictured wearing a white lace dress over fishnet tights and chunky black boots.

Beckinsale is set to star in the dramatic thriller alongside Brian Cox. Ernie Hudson and Tyson Ritter have also been announced as cast members, per The Hollywood Reporter and Deadline.

The film, written by Mark Bacci, follows ex-con Max (Cox) who’s trying to reconnect with his daughter (Beckinsale) and grandson after 12 years in prison.

“Mark Bacci’s script is a raw, personal look at a deeply fractured family, similar to my first film Thirteen (with Evan Rachel Wood and Holly Hunter),” Hardwick said of the film in a June statement to Deadline. “With Prisoner’s Daughter, I want to fully immerse the viewer in Kate’s character’s intense world as she, her father and her young son try to heal generational family trauma and find a new way forward.”