The Ghana Tourism Authority (GTA) has restrained the venues designated for the premiering of movie producer Kobi Rana’s latest movie titled, ‘Freedom and Justice’ from showing.

A statement circulated on social media from Rana said: “Our venues were served with letters with the Ghana Tourism Authority to stop showing the movie”.

“These venues were later visited, warned, and locked with armed policemen. It is unfortunate no letter was sent to us but our venues rather”, the statement said.

The movie, which reflects the structure of governance and how politics plays out, was set to be shown on 25 December and 26 December 2020 in Accra, Tema, and Kumasi.

The star-studded movie, which features David Dontoh, Irene Opare, Clemento Suarez, Kafui Danku, Kofi Adjorlolo, and Kobi Rana himself, among others, was widely publicized with a trailer. 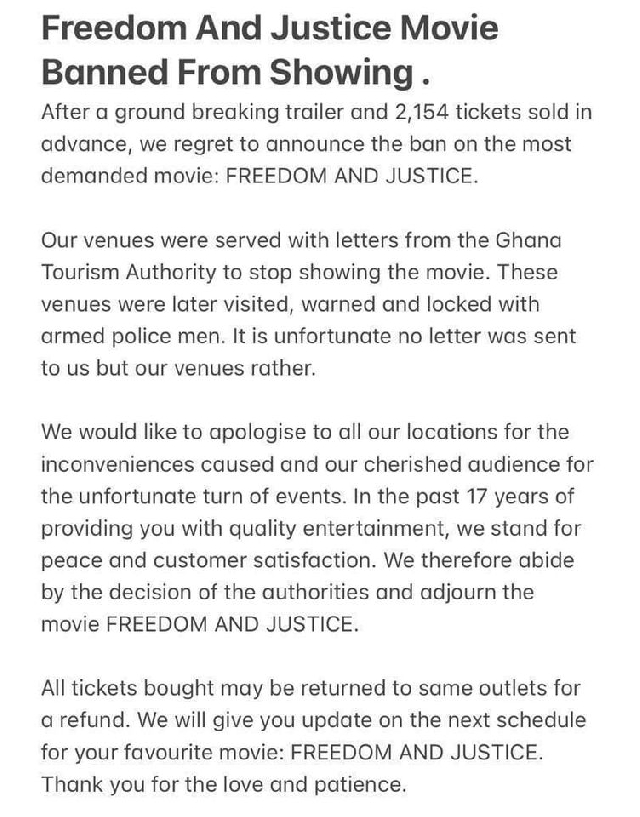 The statement apologized to the managers of the various locations and the general public for the inconveniences caused.

“We would like to apologize to all our locations for the inconveniences caused and our cherished audience for the unfortunate turn of events. In the past 17 years of providing you with quality entertainment, we stand for peace and customer satisfaction”.

The production team stated that “we, therefore, abide by the decision of the authorities and adjourn the movie FREEDOM AND JUSTICE” while calling on patrons of some 2,154 tickets in advance to return to sales outlets for a refund”.

“We will give you an update on the next schedule for your favorite movie: FREEDOM AND JUSTICE,” the statement added.