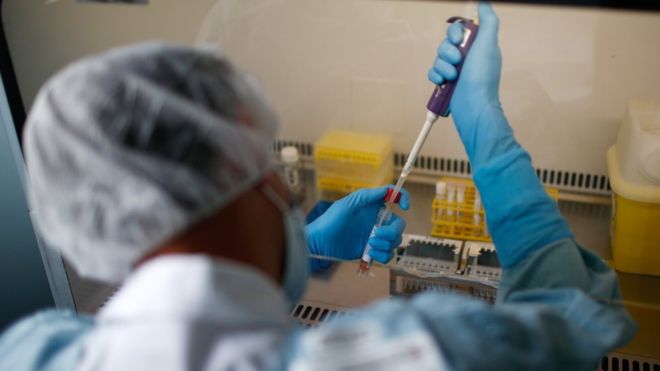 A polling station at the Police Station became the centre of fear and anxiety as the health personnel attached to the registration centre isolated 20 people, who exhibited  covid-19 symptoms.

With the thermometer deployed at the centre recording high temperatures from the affected applicants, Rabiatu Braimah, a health personnel, at the centre took the decisive action she was trained to do—separate such persons from the queue before alerting a higher authority.

“We had about 20 cases, they were having very high temperatures so we isolated them and asked them questions. About five of them were ill, even though they were trying to hide it.

“Others were coughing, clear signs of headaches and running nose…so we spoke to our bosses and the reinforcement team and all 20 were taken to the polyclinic at Korle Bu,” she said in an interview with Accra based Citifm monitored by theghanareport.com.

When asked where the suspected people are kept before they are taking to the hospital, she said they are isolated at the nursing station ‘so they don’t feel stigmatised.’

Ms Braimah reiterated the need for the police to enforce the wearing of mask directive.

Prior to the exercise, there had been fears of a possible spread of community infections as a result of large gatherings.

But the electoral commission assured that they had put in place the appropriate measures to avert the spread.

Some registration centres had to deal with people failing to adhere to the safety protocols advised by the Health Ministry.

A number of applicants were seen without nose masks and some engaging each other in a chit chat to ward off the boredom.

At the ECG Cluster registration centre near the Achimota Melcom in Accra, as well as the Osikani Video Registration Centre at Accra New Town, there was a flagrant disregard for social distancing protocols and the wearing of face masks.