At least 245 Ghanaian deportees from Kuwait are expected to arrive in the country on Saturday, the Information Ministry has revealed.

The group, which arrives on a chartered flight, will be put in a 14-day mandatory quarantine in compliance with Ghana’s COVID-19 protocols, the Minister of Information, Kojo Oppong Nkrumah, has announced.

The minister said deportees who test positive for COVID-19 will be treated at the government’s expense and would only be discharged after a second negative test.

Addressing a press conference on Friday, the information minister said “the government of Ghana has…granted a special permit for the admission of the said deportees to Ghana”.

Mr Oppong Nkrumah stated that the security services had been informed to enforce the mandatory quarantine.

He said the decision was taken to protect the larger population from the spread of the deadly virus.

The Minister said the deportees from the gulf country would, however, not go scot-free as they would remain in custody in line with the country’s immigration laws.

“It is after this investigation that a case by case determination would be made on the status and further handling of each deported,” he said.

This is not the first time Ghanaians are being imported from the gulf region.

In September 2019, 22 Ghanaians, only one of them a male, were deported from Saudi Arabia. The deportees, aged between 21 and 38 years, arrived at the Kotoka International Airport, on board an Ethiopian Airlines flight, with travel certificates issued by Ghana’s Embassy in Saudi Arabia. 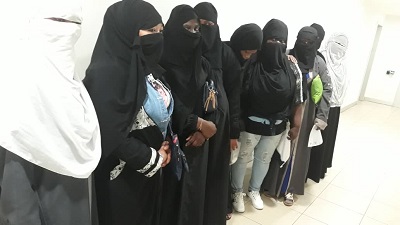 A press statement issued by Ghana Immigration Service (GIS) noted that the deportees were primary, junior high and senior high school leavers and were deported over their illegal stay.

Some of the deported women had their passports were seized by employers who claimed they owned it because they paid for it.

The Ghanaian workers were often made to overwork and accused of crimes they did not commit.

GIS data also suggest that in 2017, more than  370 Ghanaian women were deported from the Gulf States.

They were part of 547  Ghanaian deportees from Qatar, Saudi Arabia, Jordan, Oman, United Arab Emirates, and other Gulf countries.