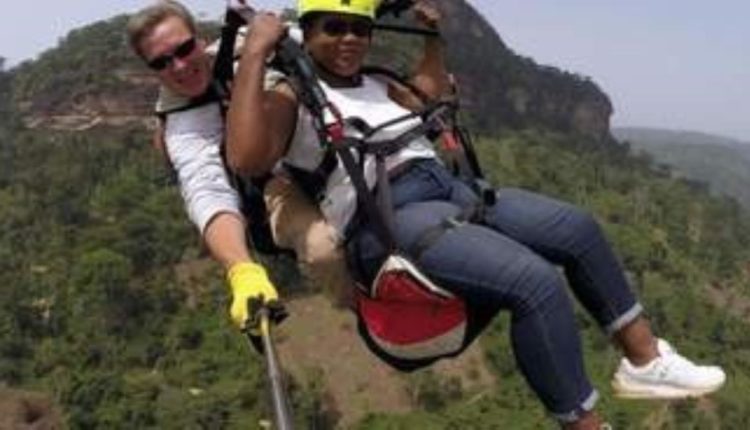 Until a few years ago, I had never been up the Kwahu mountains. Of course, I had undertaken numerous bus trips between Accra and Kumasi and one could not fail to notice the scarp jutting out majestically to kiss the skies.

I always wondered how the early settlers managed to haul themselves up there and make a home for themselves.

Of course, I had heard many rave reviews about the adorable weather, the clean air, the fresh produce and the famous, majestic homes along the ridge and owned by Kwahu diasporans both elsewhere in Ghana and abroad.

All that did not quite prepare me for my first proper visit to Kwahu Abetifi for a funeral. The sight of the town’s picturesque brown brick Presbyterian church, enveloped in the woolly morning mist, is forever burned in my memory.

For many years, it has been known that the Kwahus are rather particular about Easter and place a far bigger premium on it than Christmas.

This was way before the Kwahu ridge became known as a high-end, glitzy, high entertainment destination – a local Las Vegas, if you like.

Rummaging through Facebook the other day,I came across an interesting article extract credited to a Jesse Kwadwo Owusu Ampah of the Kwahu Historical Society on how it all came about.

He explains that “…to begin with Kwahu Easter is, first of all, not Kwahu’s traditional festival. Kwahu, just like many Akan tribes, celebrates Akwasidae – which is Kwahu’s transitional festival. The Easter festivities in Kwahu can best be described as a homecoming for Kwahus…especially those in Accra.”

He explains that with their known reputation as traders and businessmen and their huge concentration in Accra, they were loathe to take time off during the Christmas festive period to go back and see their families up the mountain when sales were booming in the capital.

This meant that the only reasonable lull for them was during the Easter break, when business was less brisk.

Mr Ampah continues, “It was during these visits in the Easter holidays that propelled the Kwahu Easter phenomenon. They would often visit the mountains with friends from Accra and other parts of the country. It became somewhat customary that often colleagues in Accra would join the Kwahus to visit their families, so that they could catch glimpse and experience their bespoke natural, tourist sites as well as the chilly weather. A move that friends from other parts of the country, especially Accra, deemed it as a break out from the bustling and hustling of the city.

“It was not surprising that later on it became an annual homecoming for them to return home within the Easter season for family and community meetings in Kwahu. This has been sustained to date among the Kwahus and other Ghanaians and even foreigners who troop in to the chilly mountains for their revelling moments during the Easter holidays.

“Over the years, the holidays on the Kwahu mountains have become more interesting with the introduction of the Paragliding event. This feature was introduced in 2005 to complement the holidays. International pilots come from other parts of the globe to fly parachutes at the Odweanoma Paragliding site to mainland Nkawkaw. This in particular has given Kwahu Easter a global prominence”, the writer states.

Over the past years, Easter in Kwahu has been increasingly viewed as a reveller’s paradise, with musical events and all manner of entertainment programmes dominating the long Easter weekend and bringing the ridge to life.

Music stars make a dash to the mountains to entertain their adorable, mostly youthful fans.

Hotels, restaurants, bars and other commercial entities do brisk business as the streets heave with humanity, partying late into the night. The chorus is ‘Kwahu oh, Kwahu!!’

Someone remarked during the Easter weekend that traffic in Accra was suddenly a pleasure and surmised that it was likely all of Accra’s V8 vehicles had emigrated up the mountain, with some wishing rather wistfully that they would seek permanent residence there and leave us in peace in the capital. Wishful thinking.

I think this year’s Easter festivities up the mountains have been particularly pronounced due to the two-year hiatus imposed by the COVID-19 restrictions.

This is hardly surprising, because after all when you come back from the point of near suffocation, you swallow fresh air with particular gusto to fill your lungs.

I am sure quite a number of people stretched and possibly burst their wallets as they went on a delirious spending spree up there over the weekend whilst chanting ‘Kwahu oh Kwahu!’

After descending from the cloud nine that the ridge no doubt is, reality will hit them when the adrenaline levels have settled down in Accra or elsewhere and there are financial commitments to meet.

But what is life if you cannot dangle over the precipice every now and then and let your head down? After all, Christ rises from the dead only once a year.

Clearly, Kwahu Easter has been branded in a most impressive manner and I have no doubt in my mind that it will continue to grow and draw crowds from across the country.

Gradually, Takoradi is also establishing itself as the place to be during the Christmas festivities as the masquerade procession gains roots there.

I would love to see various hubs spring up in this country associated with particular events or occasions, replicating the Kwahu Easter success story and I am aware the Ghana Toursim Authority, under the leadership of my friend and school mate Akwasi Agyeman, is in the process of implementing such strategies, with the next target being the Akwasidae Festival in Kumasi.

I have never visited the mountains for Easter, the allure and my annual promises to myself notwithstanding.

But one of these fine Easters, I will haul myself up the mountain, find my way to the paragliding venue and allow myself to be strapped into one of those contraptions that will enable me to float in the Kwahu atmosphere, gliding effortlessly and dreamily.

I am sure the straps are sturdy enough to contain my ample girth. So help me God.