The NPP chairman for Lawra constituency in the Upper West Region, Alhaji Mohammed Donko, has been suspended for sabotaging his own party’s 2020 campaign.

The chairman was captured on tape asking the electorate to vote for Nana Akufo-Addo for president but endorsed the NDC parliamentary candidate Bede Ziedeng.

It was to spite his own party’s candidate, Anthony Abayifaa Karbo who is also deputy Minister for Roads and Highways.

Explaining the decision, Upper West regional organiser, Mustapha Goveh, told Citi FM that the endorsement of the NDC candidate happened one Sunday night at a mini-rally in one of the communities in the constituency.

He said party officials were later told of his endorsement but ‘we thought it was a joke’.

When an NPP member in the constituency, Lamini Fuseini, petitioned the party’s regional secretariat, a process for the removal of Alhaji Mohammed Donkoh from office was activated. 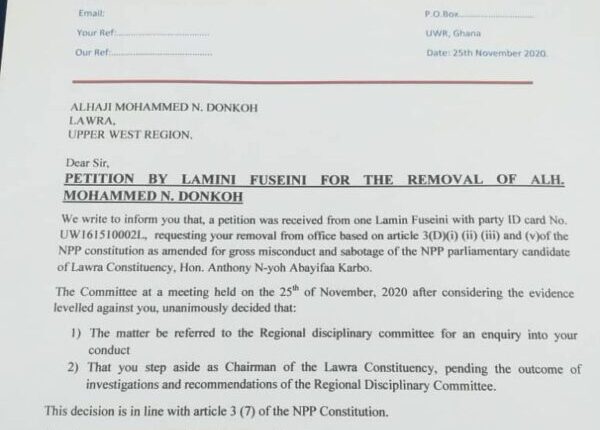 A regional committee sat to examine the petition and also give the beleaguered NPP constituency chairman a hearing. It was there that a tape surfaced capturing his voice.

“He was there when the tape was played in front of him. The only thing he could say was that the leadership of the party should forgive him.”

The NPP Upper West regional organiser, Mustapha Goveh, admitted that some bad blood exists between the constituency chairman and the Lawra MP but attempts had been made to repair it and believed their differences have been resolved.

But when he used a party vehicle donated for the party’s 2020 campaign to rather support the efforts of their political rival “we thought that he had gone far with his conduct”, he said.

Mr. Goveh said, the Lawra NPP chairman had committed the ‘highest crime against the party’

The decision to suspend him was unanimous, he said.

The seat was held by the NDC ahead of the 2016 parliamentary elections. But after the NDC MP then, Samson Abu lost the primaries, he went independent.

The split hurt the chances of Bede Ziedeng, a lawyer and NDC parliamentary candidate for Lawra in 2016.

It allowed NPP’s Anthony Karbo to snatch the seat.

Anthony Karbo was made a deputy minister under the Akufo-Addo government.

Samson Abu was sacked from the NDC for breaching the party’s constitution but has been recalled as the party tries to paper over cracks.

The Lawra constituency is one of the strongholds of the National Democratic Congress (NDC) in Ghana. The NDC held the seat for four consecutive polls, from 1992 to 2004 but lost it in 2008.