Let’s reach out to many ahead of referendum — Most Rev. Afrifa-Agyekum

Story By Kobby Asamoah On Nov 15, 2019
Share
Most Rev Afrifa-Agyekum

The Catholic Bishop of the Koforidua Diocese, the Most Rev. Joseph Afrifa-Agyekum has called on stakeholders involved in the December 17 district level elections and referendum to reach out to the populace to enable them to appreciate the importance of the exercise.

Reaching out to the electorate, he explained, was critical because the general attitude and knowledge of most Ghanaians towards the local level elections had been very low.

Most Rev. Afrifa-Agyekum was speaking at the launch of the Koforidua Diocesan sensitisation programme on the upcoming referendum and district level elections.

It was on the theme, ‘Participation of political parties and citizens in local level elections’.

It was aimed at sensitising their congregants across the entire diocese in the Eastern Region to whip their interest in the upcoming elections on December 17, 2019.

The programme was under the auspices of the Koforidua Catholic Diocese in collaboration with the Ghana Catholic Bishops Conference.

The event also had partners such as Peace for Justice Commission, an advocacy group in the Catholic Diocese with focus on educating communities on local governance system, with funding from Konrad Adenauer Stiftung. 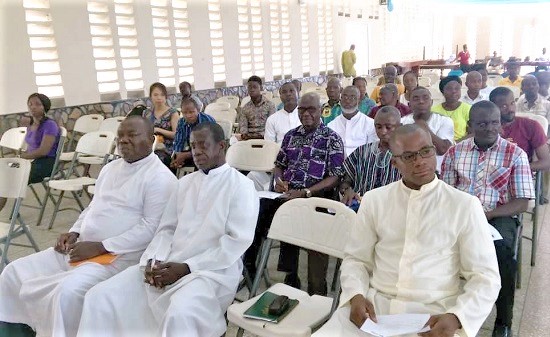 Most Rev. Afrifa-Agyekum said through the diocesan sensitisation programmes, the Ghana Catholic Bishops’ Conference was seeking to reach out to their congregants in diverse ways..

The Eastern Regional Minister, Mr Eric Kwakye Darfour, said Parliament was working to amend Article 243 (1) of the 1992 Constitution so that the President would no longer appoint Metropolitan, Municipal and District Chief Executives (MMDCE’s ) but instead be elected by the people.

A Deputy Minister of Local Government and Rural Development, Nana Adjei Boateng, explained that the local governance systems was a very critical business and explained that in advanced countries, the people placed high premium on local government elections rather than national elections.

Vice-Chairman of the Ghana Chess Association gets an international appointment

How an asymptomatic coronavirus carrier infected an apartment neighbor without…

Sulley Muntari confirms speaking with an agent over PSL move