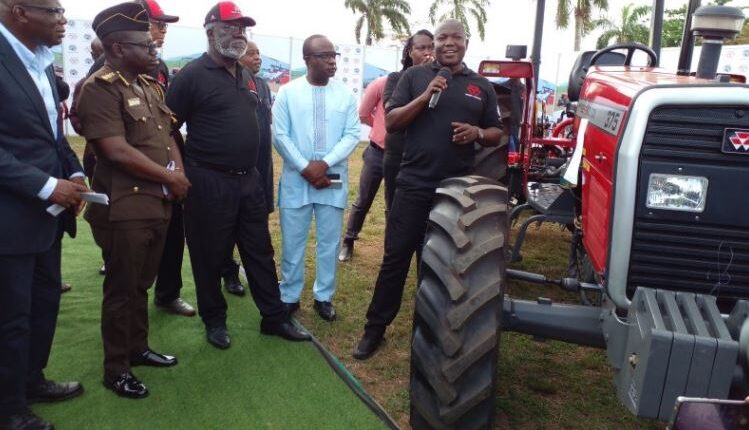 The Ministry of Food and Agriculture has asked farmers to consider mechanisation as a way of addressing issues of food security.

The Ministry said challenges such as erratic rainfall, over-aged farming population, and high demand for quality produce, would require the adoption of engineering technologies.

“Presently, there is recognition from stakeholders for the need to increase mechanisation right across the agriculture value chain, thus from land preparation, planting, crop maintenance through to harvesting and handling of produce,” Mr Patrick Ohene Aboagye, Deputy Director of Agric Engineering Services Directorate, said.

He was speaking on behalf of the Minister of Agriculture, Dr. Owusu Afriyie Akoto, at the launch of the Massey Ferguson (MF) range of agricultural machinery products in Accra, held under the theme, “Born to Farm.

The Minister said the need to increase agricultural productivity to feed the increasing population led the government to embark on planting for food and jobs in 2017 to revive agriculture and make it a catalyst for economic development.

Despite the interventions, he said approximately 70 per cent of farmers in Ghana still operated at a small scale level with basic traditional tools of farming, which contributed to about 65 per cent of agricultural output.

“It is estimated that about 8 million hectares of Ghana’s land are considered suitable for mechanised farming. However, due to limited availability and poor access to suitable farm power, less than 30 per cent of the productive area is cultivated,” he said.

The Minister noted that factors such as poor after-sale service, selection of the wrong machinery for the local terrain, limited skilled labour as well as poor management skill had in the past led to low output from mechanisation intervention, which had caused a dip in the enthusiasm of international partners to champion mechanisation.

“Additionally, some articles gave an erroneous impression that mechanisation was not an economically viable venture” he added.

Dr Akoto said that the adoption of mechanisation approach would lead to the increase of more commercially viable farms and increased productivity of food crops, adding that, “it is our hope that people will embrace the concept of the need to farm, given the appropriate set of mechanisation input to contribute to food security and emergency preparedness.”

Mrs Kalysta Darko-O’kell, the Managing Director of Mechanical Lloyd PLC, which is the sole distributor of MF products in the country said agriculture, directly and indirectly, impacted the lives of Ghanaians and was, “the reason the Company remains committed to providing world class products and services.”

On display at the launch were Massey Ferguson MF 2168 Rice Combine Harvester capable of harvesting rice under extreme conditions and MF 5700 Global series ideally suited for wide range of field work and transport.

The rest were other MF range of tractors that include MF 375 as well as harrows, ploughs, planters, sprayers, balers trailers, among others.