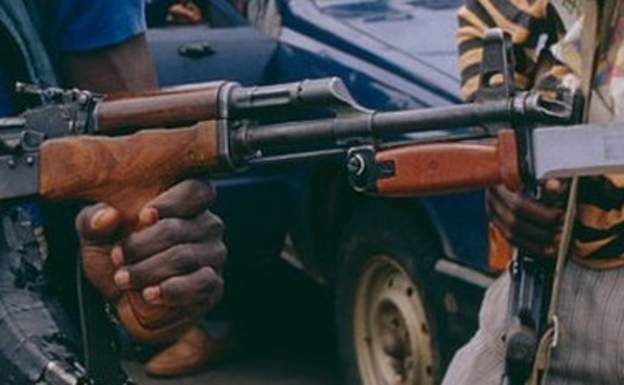 Liberian ex-fighter charged in US over civil war

A man from Liberia who had sought asylum in the US has been charged with, among other crimes, fraudulently attempting to obtain US citizenship.

Moses Wright was a former commanding general of the Armed Forces of Liberia (AFL) during the country’s civil war, and according to the indictment he was involved in persecuting and killing non-combatants.

The 69-year-old lied about this when he applied for US citizenship, the indictment from the department of justice added.

Mr Wright has not commented on the allegations.

“The United States will not be a safe haven for human rights violators and war criminals,” said United States Attorney Jacqueline C. Romero.

If convicted, Mr Wright faces a maximum possible sentence of 165 years in prison and a $7m (£5.7m) fine.

Two other former combatants in Liberia’s civil war – Mohammed Jabbateh and Thomas Woewiyu – have been convicted in the US for similar offences. A third man, Sekou Kamara, was arrested earlier this year in New York.

Liberia’s Truth and Reconciliation Commission described the AFL as a “significant violator group”, and it was found to be behind some of the civil war’s largest scale massacres, according to Civitas Maxima, a pressure group that has been working on these issues.