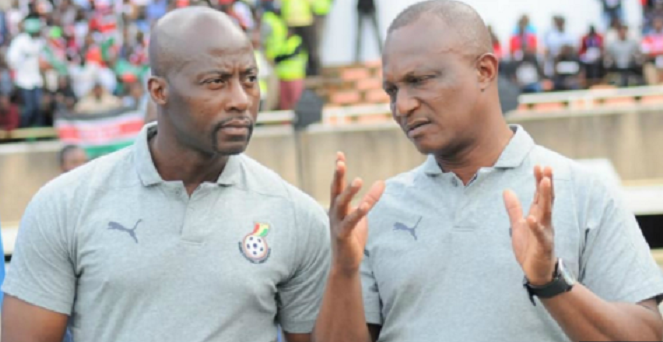 With the sacking of C.K Akonnor as the coach of the Black Stars and that of his assistants, the Ghana hot seat is vacant and the GFA is intent on filling that position by 72 hours time.

A lot of names have popped up with Borussia Dortmund coach Otto Addo and Ibrahim Tanko’s names emerging but they are not the only ones.

Otto Addo was born in Germany to Ghanaian parents but played for Ghana at the 2006 World Cup and has worked with a number of clubs in Germany since retiring and is currently with Borussia Dortmund.

Dutch-born Ghanaian George Boateng who currently coaches the Aston Villa U-23’s name has also been mentioned while the all-time favourite Herve Renard’s name has been touted but his prohibitive wages is beyond Ghanan’s breach ruling him out unless he decides to take a drastic pay cut.

Names like Mas-Ud Didi Dramani with WAFA coach who has heavily been linked with Kotoko Prosper Nartey Ogum as his assistant.’

Ghana will in the next 72 hours name a successor to fired Charles Akonnor who lost his job after Ghana’s woeful start to the 2022 World Cup qualifiers.

The Black Stars managed a hard-fought win which was down to luck rather than anything against Ethiopia before they were found out against South Africa in a 1-0 loss in Johannesburg.

Vice President of the Ghana Football Association(GFA), Mark Addo has been tasked to chair the three-member committee set up by the GFA’s Executive Council to lead the search for a new coach with 72 hours which is in three days time.

Ghana is expected to name a new coach and his assistant by Thursday as announced by the Ghana Football Association.

Other names like former coach Kwasi Appiah, Marcel Desailly have all been linked with the Ghana hot seat.