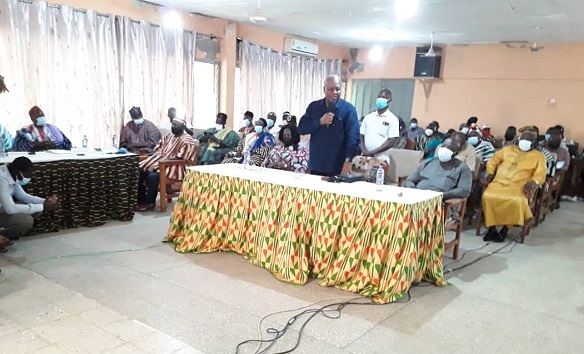 Former President John Dramani Mahama has appealed to traditional authorities in the Upper East Region to use their “moral voices” to guide the government to tackle challenges facing the country.

He listed some of the challenges as youth unemployment, abandoned projects in the road, health and education sectors as well as general insecurity in the country.

Addressing members of the Upper East Regional House of Chiefs at Bolgatanga on Tuesday (August 17, 2021) as part of his one-day “Thank You Tour” of the region, Mr Mahama further entreated members of the house to act as agents of development in their respective traditional areas.

He noted that since chiefs are the “moral voices of the society”, they can prevail on the current government to complete the abandoned projects particularly the community day schools and E-blocks, roads and hospitals that were at various stages of completion before the National Democratic Congress (NDC) went out of power.

Mr Mahama said when that is done, it will ensure that Ghanaians and the tax payer derive maximum benefits from the projects. He equally observed that it will provide more classrooms for schools to help increase contact hours among school children, thereby improving on academic performance of schools.

Mr Mahama observed that there is growing insecurity in the country due to lack of jobs among the youth.
He was of the view that unemployment among the youth is a security concern because many of the perpetrators of armed robberies are the youth of the country.

“In the night you must not risk travelling on our highways because your chances of running into a highway robbery are very high”, the former President noted.

He said while it is true that the unemployment situation is a global phenomenon, he said it is particularly a problem in Africa where millions graduate from universities and tertiary institutions yet only a few get jobs with millions left with no means of livelihood.

The former President observed that such a situation is beginning to show and in neighbouring Nigeria, some of the youth go on the rampage against those who they think are living in affluence.

In Ghana, he said the fix the country demonstrations are pointing to the fact that the youth are disappointed in the leadership of the country.

“Fix the country demonstration is not a problem of only the New Patriotic Party (NPP) but the entire country because the youth are expressing their disappointment in our collective leadership”, he stressed.

The former President said as for him, he takes the actions of the youth regarding the need to fix the country seriously because “those young people are our children”. He therefore dispelled rumours by some NPP communicators to the effect that he funded the fix the country demonstration, saying “I did not give anybody even GH¢1”.

Mr Mahama therefore called on President Akufo-Addo and his administration to hold a National Strategic Meeting on how best to create jobs on a sustainable basis because “no one party has the answer to the problem”.

According to him, “As the dominant opposition party, the NDC is ready to play its role to hold government accountable and to collaborate with government when they are doing the right thing in order that life would be better for our people”.

He explained that the NDC must play its role effectively because “however long it takes, we will take the administration of this country once again and the country must survive so that when we come into office we will be able to continue from where whoever left off”.

The former President commended the Upper East Region for showing massive support for the NDC in the 2020 elections describing it as “impressive among all the five Northern Regions”.

Mr Mahama stated that the party won 14 out of the 15 parliamentary seats and further won the Presidential elections in all the 15 constituencies of the region, explaining that it was for that reason he decided to start the “Thank You Tour” from the region to show appreciation to the chiefs and people of the area.

The President of the Upper East Regional House of Chiefs, Pe Ditundini Adiali Ayagitam III thanked the former President for the visit, describing it as “Biblical and a show of respect for the traditional rulers and the people”.

Pe Ayagitam III, who is also the Paramount Chief of the Chiana Traditional Area, equally thanked the former President for the development projects he embarked on when he was in office. He further stated that Mr Mahama has been “preaching peace and was an epitome of peace”.

The Paramount Chief was also of the view that the manner the former President handled the election petition spoke volumes and that it placed the country on a higher pedestal regarding its democracy.

Mr Mahama was accompanied on the tour by his running mate in the 2020 general elections, Professor Jane Naana Opoku-Agyemang, the first Vice-Chancellor of the University of Professional Studies, Accra, Professor Joshua Alabi and former Deputy Minister of Food and Agriculture, Dr Hannah Bissiw among other party stalwarts.