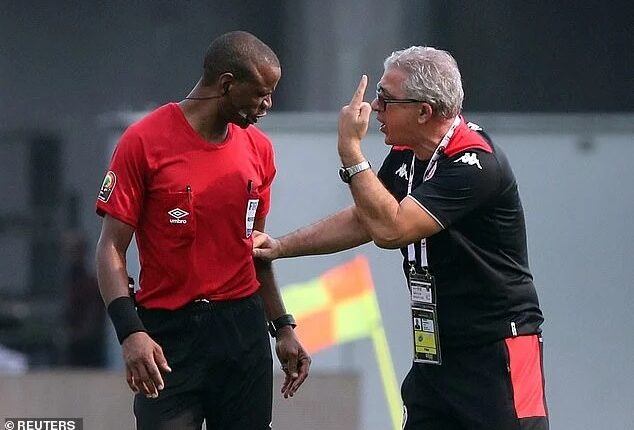 The 2021 Africa cup of Nations match between Mali and Tunisia on Wednesday was marred by a controversial referee decision as Zambian Janny Sikazwe blew for full-time early.

The match should have been about two penalties, one of which was scored by Mali’s Ibrahima Kone in the 48th minute and one which was saved by Ibrahim Mounkoro from Wahbi Khazri late in the game.

While the penalty decisions were debatable – both were given for handball – there was far more controversy to come in the final stages of the match.

First, the referee blew his whistle for full-time with five minutes still remaining on the clock, and then he ended the game in 89th minute although they were a lot of stoppages including for VAR and substitutions.

Carthage Eagles coach Mondher Kebaier and his technical staff rushed onto the field to confront the referee.

After a post-match press conference had started, tournament organisers ordered the game to be played to a conclusion.

However, Tunisia did not return to the field and Mali were declared the winner.