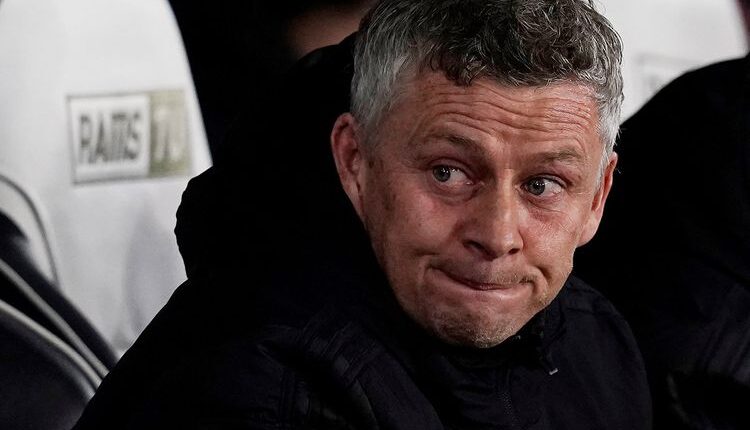 The club have won just one of their past seven Premier League matches and are seventh in the table, 12 points behind leaders Chelsea.

First-team coach Michael Carrick has been placed in temporary charge while United seek an interim manager to the end of the season.

“It is with regret that we have reached this difficult decision,” United said.

The club’s recent run of poor form includes a 5-0 thrashing by Liverpool on 24 October and a 2-0 defeat by Manchester City on 6 November.

United added: “While the past few weeks have been disappointing, they should not obscure all the work he has done over the past three years to rebuild the foundations for long-term success.

“Ole leaves with our sincerest thanks for his tireless efforts as manager and our very best wishes for the future.”

Solskjaer is a former Red Devils player, scoring 126 goals in 11 seasons from 1996-2007 including the winner in the 1999 Champions League final.

United said in their statement: “His place in the club’s history will always be secure, not just for his story as a player, but as a great man and a manager who gave us many great moments.

“He will forever be welcome back at Old Trafford as part of the Manchester United family.”

United next play when they travel to Spain to take on Villarreal in the Champions League on Tuesday, before league games against Chelsea and Arsenal.

Darren Fletcher will stay on as technical director, while Mike Phelan and Kieran McKenna – who were part of Solskjaer’s coaching set up – will also remain at the club for the time being.

Former Real Madrid manager Zinedine Zidane, currently out of work, is an early favourite with bookmakers to become United’s next manager.

Solskjaer, 48, replaced Jose Mourinho on an interim basis in December 2018.

The Norwegian was then given the job full-time in March 2019 on a three-year contract and, in July, signed a new deal with the club until 2024.

But with United finishing in second place in the Premier League last May – 12 points behind champions Manchester City – and losing the Europa League final to Villarreal on penalties, it was accepted that Solskjaer needed a trophy this season to stay in the job.

United are top of their Champions League group after four games, level on points with second-placed Villarreal but only two ahead of Atalanta in third.

They were beaten by Moyes’ West Ham in the third round of the Carabao Cup and have yet to start their FA Cup campaign.

After four wins and a draw in their first five Premier League games, United have been poor, claiming just four points from a possible 21.

United goalkeeper David de Gea described his side’s defeat by Watford as “embarrassing” and “another nightmare”.

“We don’t know what to do with the ball, we are conceding a lot of goals. It’s a horrible moment,” he added.

Solskjaer leaves United with a win percentage of 54.2% from 168 games across all competitions.

When Solskjaer signed his new deal in the summer – with an option for a further year – executive vice-chairman Ed Woodward said: “We are more confident than ever that, under Ole’s leadership, we are heading in the right direction.”

After the seismic Liverpool defeat, Solskjaer said he “had come too far” to give up. And United had attempted to stand firm with their backing of Solskjaer despite a poor start to the season. But there has been intense scrutiny and criticism of their performances from pundits, the media, and even the players themselves.

Both Paul Pogba and Bruno Fernandes have spoken out in recent weeks – and on the Monday after the humiliation by rivals Liverpool, BBC Sport reported that an increasing number of players had started to lose faith in Solskjaer’s tactics and felt he was out of his depth compared with managers at other leading clubs, namely Manchester City’s Pep Guardiola, Liverpool’s Jurgen Klopp and Chelsea’s Thomas Tuchel.

After a 4-2 defeat at Leicester in October, Pogba said United needed to “change something”, adding: “We have been having these kind of games for a long time and haven’t found the problem. We have conceded easy and stupid goals.”

And after United lost the Manchester derby, Fernandes said players needed to “look in the mirror” because they were “not at the same level” as their City counterparts.

Solskjaer sixth manager departure this season
Solskjaer becomes the sixth Premier League managerial casualty of the season, a high number that has been attributed in part to the fact that full crowds have returned to games for the first time since the start of the coronavirus pandemic. The suggestion is that struggling managers are more vulnerable to the sack with big crowds calling for them to go than they were when games were being played in empty – or partly empty – stadiums.

There were only four Premier League managerial exits in the whole of last season, and only Slaven Bilic, at West Brom, lost his job before Christmas. But this season, Xisco Munoz at Watford, Steve Bruce at Newcastle, Nuno Espirito Santo at Tottenham, Daniel Farke at Norwich, and Dean Smith at Aston Villa have all left their clubs.

United spent more than £110m in the summer, bringing in Jadon Sancho (£73m), Raphael Varane (£34m) and Cristiano Ronaldo (£12.85m) – investment that followed fan protests against the Glazer family ownership towards the end of last season.

During Solskjaer’s reign, United have spent more than £400m on transfer fees – and those signings include captain Harry Maguire from Leicester for £80m, Aaron Wan-Bissaka from Crystal Palace for £50m, Bruno Fernandes from Sporting Lisbon for £47m, and Donny van de Beek from Ajax for £39m.