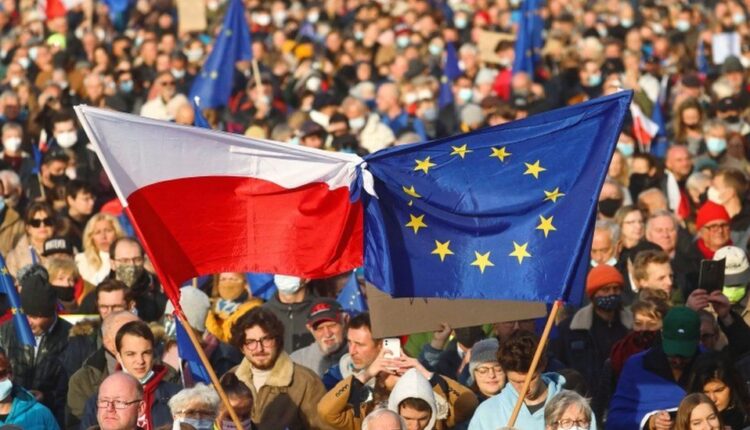 Poles backing EU membership have taken part in protests across the country, amid fears it could leave the bloc.

The rallies on Sunday were held in response to a top court ruling that said key EU laws were “incompatible” with the Polish constitution.

Protests were held in about 100 towns and cities, with some 100,000 people gathering in the capital, Warsaw.

The ruling has raised concerns Poland could exit the EU, but the government has denied having any such intention.

The court’s decision last Thursday effectively rejected the core principle that EU law has primacy over national legislation. It was the most significant challenge to the supremacy of EU law to date.

Poland’s Prime Minister, Mateusz Morawiecki, has defended the decision and said his ruling party had no plans for what some are calling Polexit.

“This is a harmful myth, which the opposition uses for its own lack of ideas about Poland’s responsible place in Europe,” Mr Morawiecki wrote on Facebook following the pro-EU rallies.

On Monday, the European Commission’s industry chief, Thierry Breton, said he did not believe “for one second” there would be a Polexit after the court ruling.

He said the Commission – which draws up the proposals for new EU laws – would analyse the ruling before deciding what action to take. The Commission has previously warned it will use all its powers to bring Poland into line with EU law.