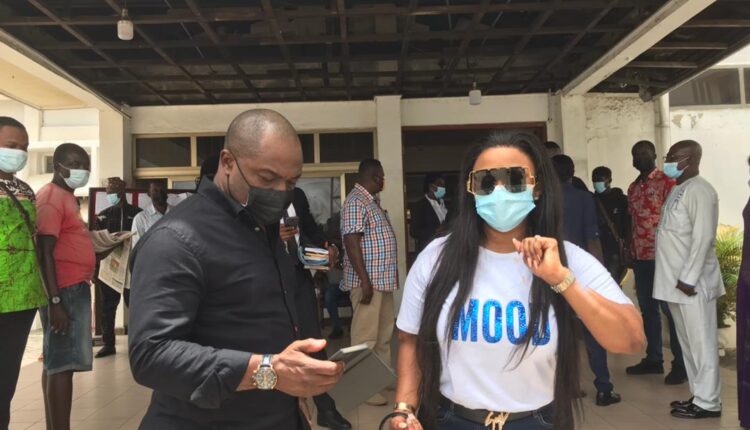 The Accra Circuit Court found itself in a fix as counsel for Nana Ama Agyemang McBrown informed the court that his client does not want to testify as a prosecution witness.

The popular actress and host of UTV’s United Showbiz was expected to testify in the case where Lawrence Nana Asiamah Hanson, known as Bull Dog, is standing trial for allegedly threatening President Akufo-Addo.

But on Friday, McBrown’s counsel Dennis Adjei Dwomoh told the court that his client’s witness statement was deceitfully taken by police prosecution.

He said the police failed to inform his client that the said testimony would be used in court.

“Pursuant to section 14 (b), any consent that is procured by deceit is void. We submit that the information given for signing the statement was not explained. The statement filed on behalf of our client was procured through deceit, so we want it to be expunged, ” he stressed.

He indicated that this new development is coming as a surprise since the witness (McBrown) was fully aware of the exact details when she signed the statement.

“When the CID invited her, she volunteered to assist and further to that a statement was filed on her behalf. It was explained to her and she willingly agreed to be a prosecution witness.

“This witness is a person of sound mind, the same witness is the host of the program United Showbiz and therefore, My Lord, she is a competent witness and can express herself to be understood.

“She has personal knowledge of the issue so she can’t say she is appearing as a court witness. We pray the court dismisses their plea. This development I am sure is an afterthought,” he said.

After the legal blows, judge Evelyn Asamoah decided that the witness statement will be showed to the actress to confirm if the signature appended to the statement was hers or not.

The statement will also be read to the hearing of the court for the witness to confirm if what was captured on the statement were her exact words.

Once the actress confirms, the court will then adopt the witness statement.

Why McBrown is in court

The versatile actress was hauled before the court to testify in the case in which Lawrence Nana Asiamah Hanson, known as Bull Dog is standing trial for allegedly threatening President Akufo-Addo.

The artist manager is alleged to have said “President Nana Addo Dankwa Akufo-Addo will not finish his four-year term if he failed to pay customers of an alleged Ponzi scheme by Menzgold’ on UTV’s United showbiz.

Hanson earlier denied the charge of “offensive conduct to breaches of the peace.”

The prosecution led by Chief Inspector Simon Apiorsornu has retaken the plea of Hanson and re-read the facts of the case after amending the charge sheet and the facts.

The new facts as presented by the prosecution were that the complainants in the case are citizens and regular viewers of the UTV program dubbed “United Showbiz,” hosted by Nana Ama Agyemang Mcbrown, live every Saturday between the hours of 9 pm and 11 pm.

Chief Inspector Apiorsornu said during the January 9th edition of the program, the issue of Menzgold was raised and Hanson quickly responded that “The President of the Republic, Nana Addo Dankwa Akufo Addo will not finish his four-year tenure if he failed to pay Menzgold customers.”

The Prosecution said on January 11, the Police intercepted the said video recording on the Facebook page of UTV, which attracted many comments from viewers who watched and heard the accused making those “unguided” comments.

In the course of the investigations, the Police requested the original video recording from UTV and it was played to the accused and he admitted having made those comments.

The Prosecution said the original video, which was in Twi and English language was forwarded to the Ghana Institute of Languages for transcription and the same was transcribed into the English language.