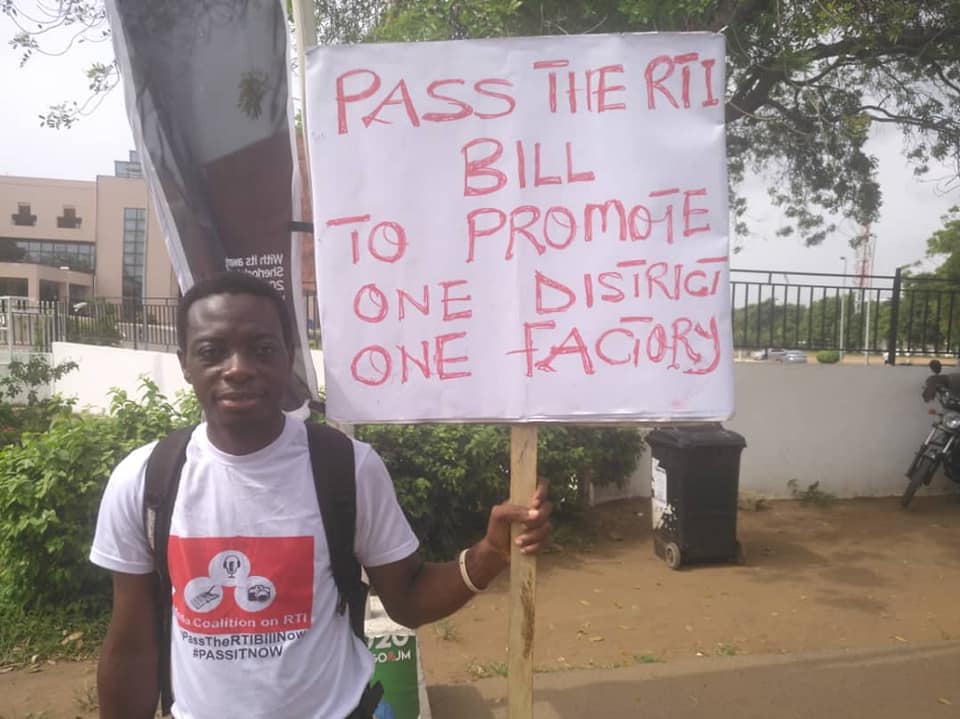 The Media Coalition on the Right to Information Bill has described as ‘misplaced’ the Speaker of Parliament’s assertion that Civil Society Organizations are creating a false impression that Parliament is being sluggish in dealing with the RTI bill currently before the house.

The Coalition said evidence abounds that without the push of CSOs, the bill wouldn’t have reached the level it is now.

The Speaker of Parliament, Prof. Aaron Mike Oquaye during an address before Parliament went on recess for the Christmas on Saturday, said the conduct of some institutions was creating an impression that Parliament was being lackadaisical in passing the RTI bill.

He said such assumptions and impressions created by the organizations were false and needed to be corrected.

According to him, Parliament on the contrary, has been working hard to get the bill passed and is sure to finish its work by the end of February 2019.

“While Parliament is still working hard to pass the RTI bill, certain persons and institutions are acting as if we are drooling off on the bill. This is fallacious and I will be glad if the media will seriously correct this misrepresentation. The bill has seen several years and several parliaments, and it is tricky in many ways,” the speaker said.

But a leading member of the Media Coalition on RTI, Elvis Darko, who’s the Editor of the Finder Newspaper in a Citi News interview expressed regret at the comments of the speaker.

He said CSOs must be credited for pressurizing the house to move forward with the bill.

“The speaker’s comment to us, is misplaced, because the bill was something they promised to pass before they rise for the end of this year. When they resumed the last sitting, Media Coalition was in parliament to remind them, so for the speaker to say that we are making it to look like they are not doing the work is misplaced. The evidence shows that without the pressure of Civil Society Organizations, the bill would not have been where it is today, so for us, so long as we have reason to believe the bill is being delayed unnecessarily, we will put pressure until it is passed. That is our position and we are not changing our position,” Elvis Darko said.

He however gave a new assurance that the RTI bill will be passed before the end of February 2019 since the house has done about 80% of the work required.

The right to information is a fundamental human right guaranteed by the country’s 1992 Constitution and recognized as a right under International Conventions on Human rights.

The Bill as has been drafted is to give substance to Article 21 (1) (f) of the Constitution which states that “All persons shall have the right to information subject to such qualifications and laws as are necessary for a democratic society.”

This will not be the first time the leadership of parliament has given assurances of having the bill passed.

The Minister for Parliamentary Affairs and Majority leader, Osei Kyei Mensa Bonsu earlier this month said the house will pass the bill by the end of January 2019 should it miss its December 23 deadline.

The RTI bill has become controversial due to how various parliaments over nearly two decades, have handled it and failed to pass it.

The back and forth

The Right to Information Bill was first drafted in 1999 under former president, Jerry John Rawlings.

The National Democratic Congress (NDC) in its 2008 and 2012 election manifestos promised to ensure the Bill was passed. In 2010, it was presented to Parliament for consideration.

In 2011, the government signed unto the Open Government Partnership (OGP) Initiative with a commitment to pass the law. In November 2013, the Bill was formally laid before parliament.

Former Attorney General, Deputy Dominic Ayine in 2015, moved the Bill for second reading in Parliament. In October 2016, the Bill was withdrawn and replaced with a new one which was immediately laid.

Following the dissolution of the Sixth Parliament of the Fourth Republic and the swearing-in of new Parliament in January 2017, the Bill had to be re-laid by the new government before work commences on it.