When Ms Priscilla Otomo picked her pen in 2009 to write an open letter to President J.E. A. Mills in The Ghanaian Times newspaper, she had only one wish—that the Bank of Ghana print the names of the Big Six on the GH₵10 note.

She had her wish. The President first gave her a surprise phone call.

“Ex-President Atta Mills followed up on the publication. In a conversation, he agreed to have my ideas implemented,” she told theghanareport.com.

Ms Priscilla Otomo Tetteh, the National Youth Personality for 2006, said she got the inspiration to write the letter from a conversation between pupils standing in a queue at a ‘trotro’ station.

The children were arguing about the names of the members of the ‘Big Six’—leaders of the first party registered in the then Gold Coast, the United Gold Coast Convention (UGCC). They were arrested and detained under the Emergency Regulation in 1948 during disturbances in the Gold Coast. Those events eventually snowballed into what propelled the country to independence. 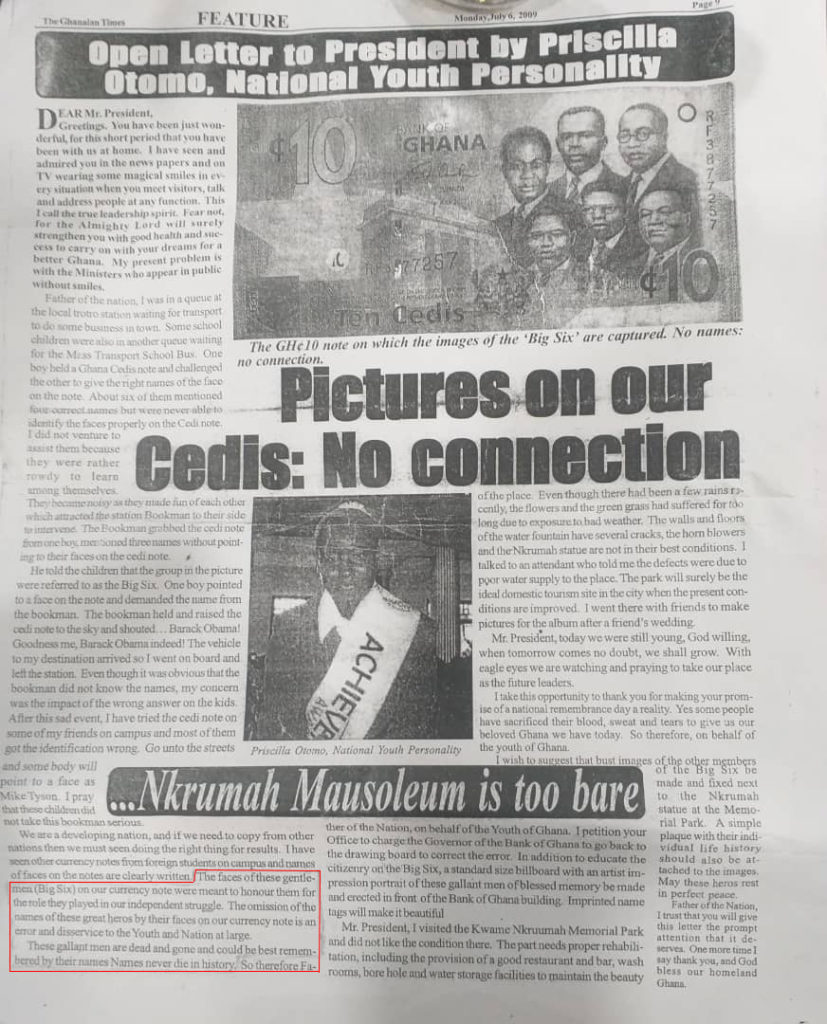 When the children turned to an elderly person to help them out of the confusion on the identities of the six personalities, he made matters worse.

“The man, who was selling books, grabbed the cedi note from one boy, mentioned three names without pointing to their faces on the currency. One boy pointed to a face on the note and demanded the name from the book vendor.

“He raised the cedi note to the sky and shouted Barack Obama! Goodness me! Barack Obama indeed! The vehicle to my destination arrived, so I went on board and left,” she said.

After the incident, Ms Tetteh an ardent writer made a passionate appeal to President Mills in her letter to The Ghanaian Times to have the names of the ‘Big Six’ inscribed on the cedi note. It previously had only the photographs.

She said, from there, President Mills, who later died in office on July 24, 2012, took a keen interest in her articles.

“Anytime, he [President Mills] got a copy of my publication he made sure he contacted whoever was in charge [agency responsible]. And they called me and asked me one or two questions,” she stated.

In the case of the cedi note, she said she had a call from a Bank of Ghana staff who said, “they would work on it and get back to me. The person said ‘it’s a very good suggestion’ so whatever that is due, any recognition that is due will be given to me.”

True to President Atta Mills’ words and assurances, several years after his demise, a look at the new GH₵ 5, GH₵10, GH₵20, GH₵ 50, GH₵ 100 and GH₵ 200 cedis notes shows the names of the ‘Big Six’ boldly printed on each picture.

She said while the Bank of Ghana promised her a reward; she was indifferent about it.

She said it was her belief that the concentration should rather be on the results, not the applause.

Asked if she would like to be rewarded by the government or the BOG for her contribution to the new cedi notes, she shrugged, burst into laughter and said, “I don’t know. Unfortunately, I really don’t know.”