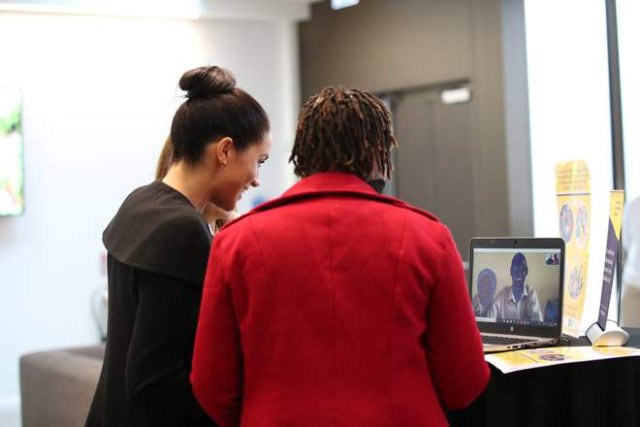 The pregnant Duchess of Sussex skyped a delighted student in Ghana as she visited students and academics from the Commonwealth in London today.

She spoke with Hilary Harawo, a student in Ghana while attending a meeting with scholars from the Association of Commonwealth Universities (ACU) for the first time since becoming the institution’s patron.

Meghan visited City, University of London – one of the ACU’s 500 university members – to chat to students from the Commonwealth now studying in the UK.

The Duchess of Sussex, who was on her second royal engagement in two days, received a rock star welcome with well-wishers cheerering and waving union flags as she arrived for the event.

By bringing universities, academics and students together from around the world, the ACU aims to advance knowledge, promote understanding, broaden minds and improve lives.

Dr Joanna Newman, chief executive and secretary general of the ACU, said earlier this month, when Kensington Palace announced Meghan was succeeding the Queen as the ACU’s patron: “The Duchess shares our passion for the transformational power of higher education, and Her Royal Highness’s support will help champion higher education as a force for good in the Commonwealth and beyond.”

Established in 1913, the ACU is one of the world’s oldest international university networks, with more than 500 member institutions in over 50 countries.

It manages international scholarship schemes – including the Queen Elizabeth Commonwealth Scholarships – that offer life-changing educational opportunities, convenes universities to address key policy challenges such as climate resilience and peace and reconciliation, and promotes the role of universities in delivering the UN Sustainable Development Goals.

And in December, the duchess met with university leaders, academics and international scholarship students as they discussed the role of higher education in addressing issues like human trafficking, modern slavery, gender equality, peace and reconciliation, and climate change.