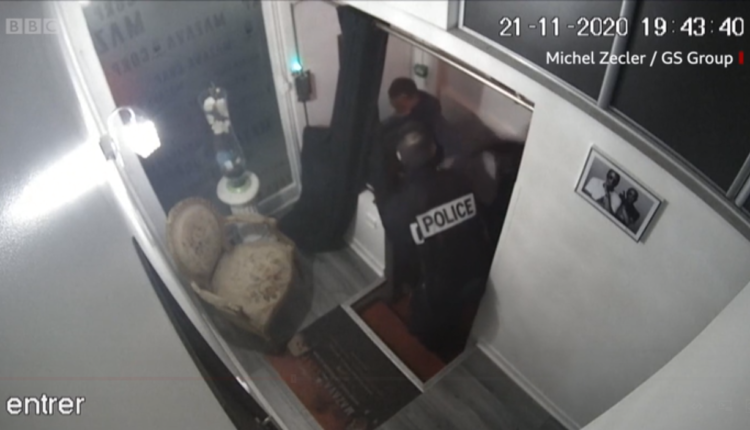 A French judge has placed four police officers under criminal investigation over the beating of a black music producer at his studio in Paris earlier this month.

Two have been remanded in custody.

The decision to open a formal investigation comes amid growing concern over police violence in France.

On Saturday, protests were held across the country against a security bill that would restrict the right to film or take photos of police. In Paris demonstrators clashed with officers.

Opponents say the bill would make it difficult to document police brutality.

Advocates say it will protect police from harassment.

What happened to Mr Zecler?

CCTV footage published by the news website Loopsider on Thursday shows Mr Zecler being kicked and punched for several minutes by three officers at his Paris studio on 21 November.

A fourth is later seen throwing a tear gas canister into the building. The incident reportedly began with a dispute over whether the 41-year-old producer was wearing a face mask, as required during the Covid-19 pandemic.

Mr Zecler, who needed stitches, says he was also racially abused during the attack.

In addition to the “intentional violence” charge, all four officers are accused of forgery. That charge relates to the police report filed after the incident, which said “a strong smell of cannabis” had emanated from Mr Zecler and that he resisted a search.

At the weekend, prosecutors said the officers had admitted that their violence against Mr Zecler was unjustified but said they acted out of panic after he resisted them in the cramped surroundings of the studio entrance.

The prosecutors said three of the policemen should be remanded into custody to stop any attempt to co-ordinate their stories. But the judge said only two would remain in detention.

Stars of France’s victorious World Cup football team are among a number of public figures who have expressed anger over the footage.

President Emmanuel Macron described the incident as “unacceptable” and “shameful”, demanding quick government proposals on how to rebuild trust between police and citizens.

Separately, the government has ordered police to provide a full report after they violently dismantled a makeshift migrant camp in Paris last week, clashing with migrants and activists.

What about the controversial bill?

The legislation on “global security” was backed last week by the lower house of the French parliament, and is now awaiting senate approval.

Article 24 makes it a criminal offence to publish images of on-duty police officers with the intent to harm their “physical or psychological integrity”.

The government argues that the bill does not jeopardise the rights of the media and ordinary citizens to report police abuses, and is only aimed at giving protection to police officers.

But opponents say that without such images, none of the incidents which took place over the past week would have come to light.

In the face of growing public criticism, Prime Minister Jean Castex said on Friday that Article 24 would be amended.