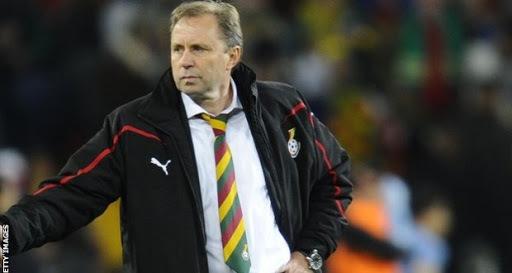 The unveiling will be at press conference to be held at the GFA Conference room at 2 pm local time.

Reports say Rajevac is currently in the country to finalise a 2-year deal with the GFA to take over Black Stars job for the second time.

He replaces Charles Kwabla Akonnor who was sacked recently following the team’s poor start to the FIFA 2022 World Cup qualifiers.

The 67 year old is expected to turn the fortunes of the team by qualifying for the 2022 World Cup and also winning the Africa Cup of Nations in Cameroon 2022.

In his first stint, he led the team to the finals of the 2010 Nations Cup and the quarter-finals of the FIFA World Cup in the same year.

Meanwhile, Dortmund assistant coach Otto Addo and Head of the Right to Dream Academy in Ghana Masud Dramani are expected to be announced as his assistants with Aston Villa U – 23 head coach George Boateng also being named as a scout for the team.

Otto Addo and George Boateng will reportedly keep their current jobs while serving the Black Stars should their appointments be confirmed.

Ghana will take on Zimbabwe on Match Day 3 of the qualifiers at the Cape Coast Sports stadium on Saturday, October 9, 2021 at 1600Hrs before traveling to Harare for the reverse fixture 3 days later.