Economic inequality is widening across the world and women, in particular, are feeling its effects as care work remains undervalued, according to a new report by anti-poverty charity Oxfam.

The world’s 22 richest men, for instance, own more wealth than all 325 million women in Africa combined, Oxfam’s Time to Care report showed.

“When 22 men have more wealth than all the women in Africa combined, it’s clear that our economy is just plain sexist,” Danny Sriskandarajah, chief executive at Oxfam Great Britain said in conjunction with the report’s publication on Monday. 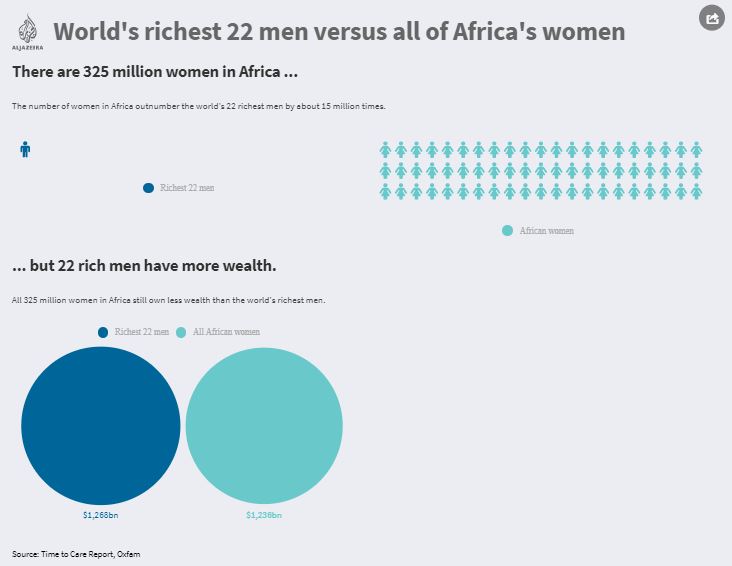 Published in advance of the World Economic Forum in Davos, Switzerland, where world leaders will meet this week, Oxfam’s report highlighted how women are “chronically undervalued” for unpaid care work, Sriskandarajah said.

“If world leaders meeting this week are serious about reducing poverty and inequality, they urgently need to invest in care and other public services that make life easier for those with care responsibilities, and tackle discrimination holding back women and girls,” he said.

Women risk being trapped in poverty with little time to get an education, earn a decent living or have a say in how society is run, Sriskandarajah added.

Men not only own more than 50 per cent more wealth than women, but they also control government decision making. On average, women make up only 18 per cent of cabinet ministers globally and 24 per cent of parliamentarians.

Oxfam’s data showed that more women are left out of the workforce during their peak productive and reproductive ages, worsening the income gap between men and women. 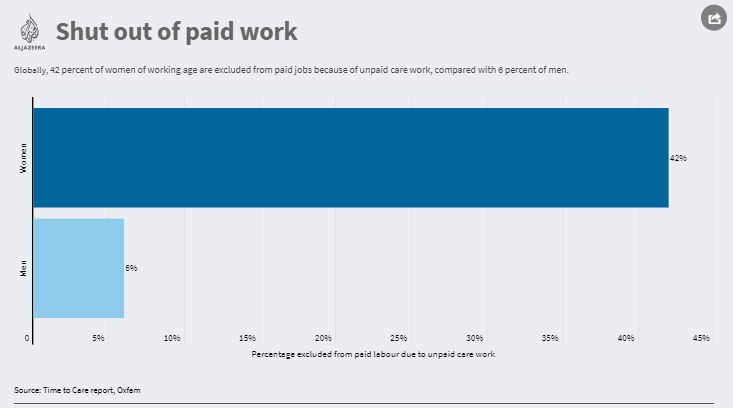 The problem of inequality affects more than just women as more than half of the world is trying to survive on $5.50 a day or less, according to data from the World Bank.

“Many people are just one hospital bill or failed harvest away from destitution,” Oxfam said in its report.

The world’s total number of 2,153 billionaires had more wealth than the poorest 4.6 billion people, which is more than half the global population, Oxfam’s data showed. 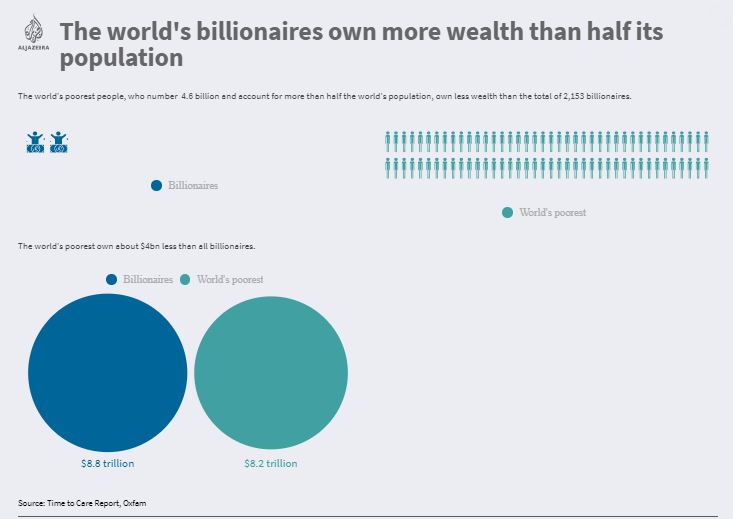 The pressure on carers is set to grow in the coming decade as the world faces not only an ageing population but also the negative effects of climate change, such as requiring women to travel further to get clean water for their households, said Oxfam.

Fairer tax systems that tighten and close loopholes should be prioritised by governments, which should invest in national care systems so that the burden of care does not fall on unpaid work by women, the charity urged.

“[Our] research has shown that providing access to an improved water source could save African women significant time, for example in parts of Zimbabwe up to four hours of work a day, or two months a year,” Oxfam said.

“Investments in water and sanitation, electricity, childcare and public healthcare could free up women’s time and improve their quality of life.”