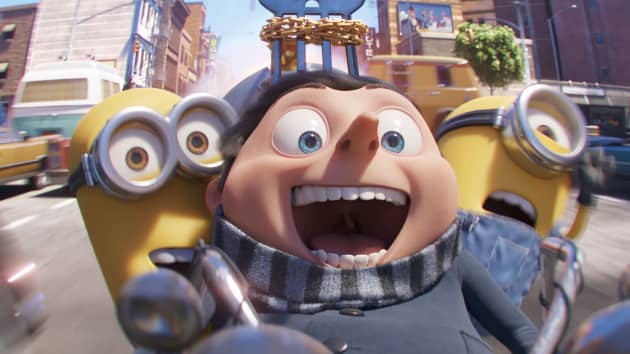 Families have gone bananas for “Minions: The Rise of Gru.”

Over the weekend, the Universal and Illumination animated feature tallied more than $108 million in ticket sales.

The fifth film in the Despicable Me franchise generated an additional $93.7 million from international markets, bringing its estimated opening weekend haul to $202 million globally.

“With the incredible success of ‘Minions,’ the notion that family audiences were avoiding movie theaters due to Covid concerns can be shelved,” said Paul Dergarabedian, senior media analyst at Comscore.

Box office analysts had wondered if this segment of moviegoers was still avoiding cinemas after Disney and Pixar’s “Lightyear” took in just $51 million during its domestic debut last month, below expectations of $70 million and $85 million.

It was unclear if tough box office competition led to “Lightyear’s” less than stellar debut or if consumers were confused about the film’s release. After all, there has not been a theatrical release of a Pixar film since 2020′s “Onward.” The last three from the animation studio, “Soul,” “Luca” and “Turning Red,” were all released on streaming service Disney+.

“Minions: The Rise of Gru” represented 54% of all domestic moviegoers over the weekend, with 68% of ticket holders being part of family groups, according to data from EntTelligence.

“What this weekend has showcased is a triumphant return to cinemas by families, laying to rest any lingering and outdated pandemic narrative that parents and kids only want to watch movies at home,” said Shawn Robbins, chief analyst at BoxOffice.com. “When the right content is out there, people will show up.”

The film is expected to add another $20 million in ticket sales in the U.S. and Canada on Monday, bringing its holiday weekend total to $128 million.