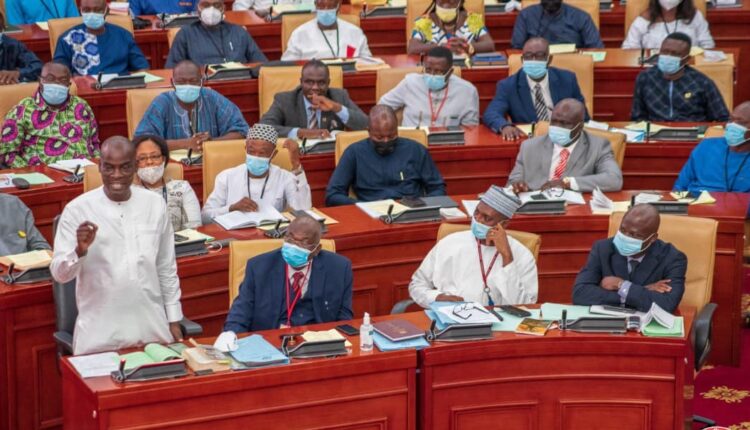 Mr Joseph Cudjoe, the Minister of Public Enterprises and Member of Parliament (MP) for Effia, on Tuesday, seconded the motion on the 2023 Budget Statement and Economic Policy of the Government, and urged the House to approve it.

The Budget Statement was presented to Parliament on Thursday, November 24, 2022, by Mr Ken Ofori-Atta the Minister of Finance on the behalf and the authority of President.It was on the theme: “Restoring and Sustaining Macro-Economic Stability and Resilience through inclusive growth and value addition”.

Mr Cudjoe noted that when the House approved the 2022 budget to enable the Government to spend to revitalize the country for the period 2022, little did they know that the stable macro-economy that the nation had enjoyed over the period 2017 to 2019 where inflation rate level and exchange rate levels were very conducive for businesses and depreciation of Ghana Cedi was also very appropriate for businesses, was going to face challenges.

“Little did we know that after the COVID-19 pandemic that Russia would attack Ukraine and create global supply chain disruptions and lead to dissipation of our balance of payment position in such a fast manner that our cedi will become vulnerable and depreciate and cause spiralling inflation and also create a macro-economic environment charaterised by a lot of uncertainties,” he said

“So, currently, Mr Speaker, we see a prevailing macro-economic environment which has made general life unbearable and businesses are reeling under a lot of uncertainties and difficulties.”

He said nonetheless, the Minister of Finance, putting the 2023 budget together, they had seen spaces in the budget, which gives hopes and opportunities that at least there was something to fall on and solve the problems that have characterised economy up to date.

Touching on opportunities in the budget, Mr Cudjoe said Government in fulfillment of its pledge of building an entrepreneurial state, the implementation of the YouStart programme began this year.

“YouStart project is projected to create a million jobs for the youth of this country over the period 2022 to 2025,” he stated.

He said this would be done through provision of soft loans to the youth to startup enterprises.

Mr Cudjoe said the YouStart Project had been successfully piloted to 70 beneficiaries with an amount of 1.98 million Ghana Cedis, indicating an average of almost GHC30,000 per beneficiary.

The Minister said the success chalked from the piloting, had given impetus to its implementation and that in the year 2023, a full role out of the YouStart would be implemented.

He said the programmes came in in three categories – the first category for youth who have completed school and are looking to start up their own businesses.

He said the second category was for commerce – this is District Entrepreneurship Programme and under this, small and medium enterprises would be supported with loans up to hundred thousand Ghana cedis per enterprise.

He said the sweetener in this programme was the third category, which was called, YouStart Race, which was targeted at women, especially in the rural areas and to be implemented through faith based organisations.

He noted that the unemployed would also be part of the project.

Mr Cudjoe said these interventions were expected to support the youth of this country.

“But then, Mr Speaker, if any of us will question the importance of this intervention, I take the opportunity to draw our attention to the fact that when Bill Gate started Microsoft, he was just 20 years of age, and today, his company rakes in revenue to the extent of almost $198 billion dollars and Mr Speaker if I am not exaggerating that is about three times the GDP of Ghana,” he said.

“And this economic power has been delivered to the ecocomy of the US by a young man, who started his business at the age of 20.”

Mr Cudjoe drew the attention of the House to the fact that Mike Zuckerberg, who owns partly now Facebook, started Facebook when he was just 19.

“And, so, I am pointing this out to all of us to give our support to the YouStart, because the youth of this country have the potential to do same, and grow enterprises to support this economy, rather than relying on support for only those of us who close to retirement and thinking we are the ones to revive this economy into the future.”