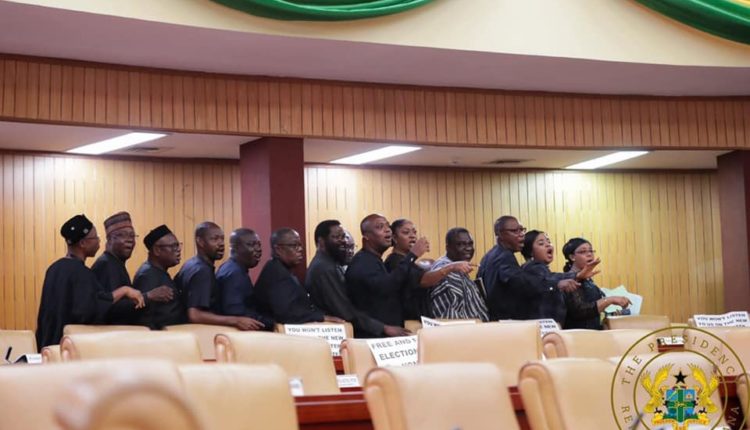 The Majority Chief whip, Mathew Nyindam, has conceded that the Minority’s boycott of the State of The Nation Address (SONA) debate left a void in the entire exercise.

“Obviously, their abstinence is taking something from all of us. They should have given us some flavour. When we’re talking about good, they’ll be talking about bad.

“At the end of the day, it makes the soup very palatable. But unfortunately, they have decided to abstain and we have taken charge. So, we will continue to take charge,” the Majority Chief Whip said.

The NDC MPs on Tuesday abstained from debating President Akufo-Addo’s SONA over what they say is a matter of principle.

Even though some Minority legislators were present in Parliament, they refused to contribute to all discussions related to the SONA.

On Thursday, the opposition MPs lived up to their words to boycott the address, if the government fails to pay their share of the District Assemblies’ Common Fund (DACF).

The Minority MPs, who were dressed in black, took the nation by surprise when they filed out the moment the Police band finished rendering the national anthem.

After they had boycotted the event in the chamber, the Minority MPs made a sharp U-turn on the reason for their boycott.

Tamale Central MP, Inusah Fuseini, said the common fund excuse was only a trick to cover up the real reasons.

They have received widespread criticism from a section of the public who described their actions as unnecessary.

But the Minority MPs maintained their boycott, and subsequent silence during the debate, was necessary to drum home their message.