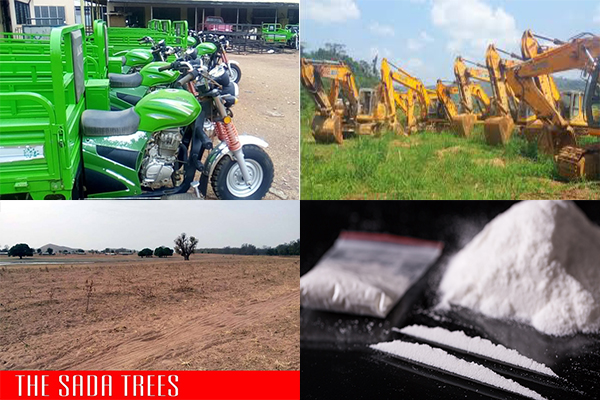 Many Ghanaians were left scandalised over the admission of Minister of Science Technology and Innovation, Prof Kwabena Frimpong-Boateng’s admission that many seized excavators have gone missing at the various assemblies.

The excavators were used for illegal mining also known as ‘galamsey’.

While disputing the claims of former Lands and Natural Resources Minister, John-Peter Amewu that the seized heavy-duty equipment was 500, he could not state the actual numbers when he spoke to Joy News on Monday.

Ghana has a long history of state assets, dockets and crime exhibits disappearing or changing form under mysterious circumstances.

In April 2003, Ghanaians were shocked to learn that a vessel carrying thousands of barrels of crude oil from one of Ghana’s Saltpond oilfields has mysteriously disappeared from the country’s territorial waters.

Officials of the Ghana National Petroleum Corporation (GNPC) received an emergency call from the oil rig where the vessel, MV Asterias 1, had been operating, saying it was sailing away in an easterly direction.

The vessel left Ghanaian waters before the country’s navy could stop her. At the time of its disappearance, it was carrying  nearly 74,000 barrels of crude oil, worth $2million.

The ship was later found in Nigeria and returned to Ghana 61 days after its disappearance. Its Nigerian owners had moved the ship over debts managers of the Saltpond Oilfields owed.

In August 2011, the Ghana Police Service added miracles to its list of functions when under bizarre circumstances a one-kilogramme parcel of a substance suspected to be cocaine somehow metamorphosed into baking soda.

After a Bureau of National Investigations inquiry into the scandal, the then Deputy Commander in charge of the Commercial Crimes Unit of the Police Service, Gifty Tehoda, was interdicted in September 2011.

The substance was seized from one Nana Ama Martins who was accused of possessing a parcel of substances suspected to be cocaine. It was during her trial that it was found that the suspected cocaine somehow changed into baking soda under mysterious circumstances in court.

In April 2014 Ghanaians were left angry over a Joy News’ investigations revealed that although the 32.4 million Ghana cedis allocated to Savannah Accelerated Development Authority (SADA) to implement the afforestation project has been spent, there is not much to show on the ground.

The investigative work done by Manasseh Azure Awuni, further revealed that the project has rather contributed to the depletion of the environment.

According to the story, the natural vegetation cover had been destroyed to make way for the afforestation project, but the project has failed to yield any positive result.

Before then, management of the defunct Savannah Accelerated Development Authority  (SADA) made hilarious media headlines when they disclosed in one of their responses to the whereabouts of the hundreds of guinea fowls they claimed to be rearing that the birds had flown to Burkina Faso.

Their response followed fact-finding visits by journalists to the facility where the animals were being reared by Asongtaba Cottage Industry at Sumbrungu near Bolgatanga in the Upper East Region.

The media, during the numerous visits, only spotted a handful of birds contrary to reports that they were in hundreds, in justification of the huge sums of money government sunk into the project.

The management at the time struggled to explain the whereabouts of the rest of the birds to the extent it was revealed they may have flown to an unknown destination in neighbouring Burkina Faso.

The Chief Executive of SADA, Charles Abugri, will later say that statement was a joke.

Ghana’s annual Auditor-General’s report give anti-corruption fighters so much to worry about. Cases of missing funds are a permanent staple in the report that gives audited accounts of the public purse expenditure.

In 2018, it reported that f GHC25.5 million remains missing after the Ghana Revenue Authority (GRA) failed to account for the sale of some 1,719 vehicles.

That was not all.

The same report cited five officials of the Nkwanta-North District office of the Ghana Education Service (GES) for squandering GH¢276,621.

The report cited them for financial irregularities ranging from misappropriation of school capitation grants for personal use, payment of public funds into personal accounts to failure to account for public funds.

Money may disappear unseen because they are in accounts but for 400 tricycles to vanish without a trace is what the Criminal Investigations Department (CID) has been tasked to probe circumstances under which some 400 tricycles were allegedly stolen from the Northern Development Authority’s (NDA) yard.

In 2019, the whereabouts of the tricycle has been a subject of accusations and counter-accusations between the Northern Regional Minister, Salifu Saeed and NDA Chief Executive, Dr Alhaji Abdel-Majeed Haroun,e who has since been sacked.

The NDA Chief Executive alleged that the regional minister distributed the missing tricycles to youth sympathetic to the New Patriotic Party.

7. Then there are missing dockets: