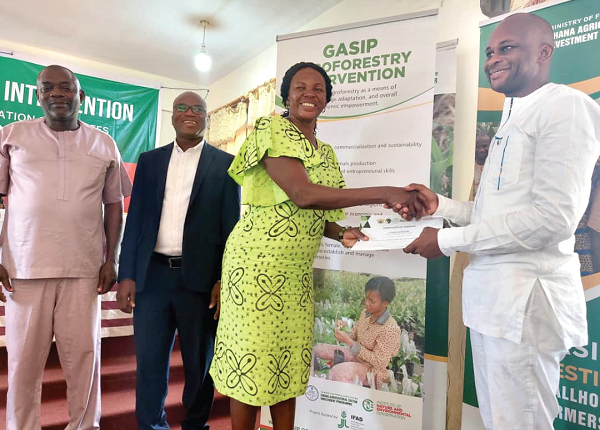 The Ghana Agricultural Sector Investment Programme (GASIP), in collaboration with Ministry of Food and Agriculture (MOFA), is undertaking an afforestation project in line with the government’s agricultural flagship programme, Planting for Export and Rural Development (PERD) under the Planting for Food and Jobs.

It is aimed at mitigating the effects of climate change on farmers and also enhance the livelihood of farmers in the country.

Dubbed, Agroforestry Intervention Projects, farmers from 20 districts throughout the country have been trained in courses on nursery establishment and grafting of seedlings.

It is aimed at promoting agroforestry as a means of climate change adaptation, improvement of the local climate and overall economic empowerment and was funded by the International Fund for Agricultural Development (IFAD).

In all, 805 farmers, 52 per cent of whom were females, established 40 community-based seedling nurseries and raised a total of 413,833 seedlings in the 20 districts as a means to diversify sources of income for the farmers.

The seedlings are mostly cashew at the nurseries which are sold out to the Green Ghana Day programme and individuals in a bid to mitigate the impact of climate change.

The funds realised from the sale of the seedlings are to be used to assist the farmers establish their own environmentally sustainable farms.

A symbolic project closure and graduation of 40 trainee farmers who completed an eight-month training course on nursery establishment and grafting of seedlings was held at Jirapa in the Upper West Region.

Three districts, namely Jirapa, Wa West and Nandom, are among the beneficiary districts benefiting from the programme nationwide.

Similar events were held at the various beneficiary districts across the country, during which certificates were presented to each participant.

In a speech read on his behalf, the National Project Coordinator, Klutse Kudomor, said the need to mitigate the risk of climate change called for the promotion of environmentally sustainable agronomic practices.

Thus GASIP, he said, was supporting farmers with the project to ensure that they practice environmentally sustainable farming, which would lead to improvement of the soil and high crop yields, thus enhancing their livelihood.

Mr Kudomor urged district assemblies and the Forestry Commission to support the farmers to become the first port of call for the supply of seedlings towards any exercise that would promote climate change throughout the country.

That, he said, would motivate communities to produce more seedlings and also drive their interest in protecting the environment against climate change.

He commended the trained farmers for the commitment, saying: “You are among a few trained ones who can deploy grafting in seedling production that testifies your resilience and capability in supporting the nation to protect the environment.

“This programme also positions you in having private sector business engagement in seedling production, as well as in commercial tree crop farming,” he said.

The Regional Director of MOFA, Emmanuel Sasu-Yeboah, pointed out that the programme would go a long way to fight the menace of climate change that was a major challenge, especially in the northern part of the country.

He was happy that the youth and persons with disabilities (PWDs) had been involved in the project and pledged MOFA’s continued support at combating land degradation and desertification for the improvement of the soil condition for crops.

The MCE commended GASIP for bringing the project to the area and called on the beneficiary trainee farmers to bring the knowledge acquired to the doorsteps of their fellow farmers who were not lucky to benefit from the project.

The GASIP was designed to address the problems of the smallholder farmer by leveraging on the private sector in making the smallholder farmer competitive by increasing their efficiency and resilience to climate change through the provision of appropriate technologies, rural infrastructure and equal participation of women and youth.

The state of GASIP, under the current leadership, is one that gives testimony that if a task is entrusted to responsible and committed people, it is carried out to perfection.

GASIP’s implementation status as of April 2019 was 12 per cent, giving the financiers the unpleasant duty of rating it as a non-performing programme and threatening to end the project.

However, by October 2020, the implementation status of the project had increased to 76 per cent. Management did this by supporting the smallholder farmers.
GASIP created shared values and opportunities within the value chains of rice, maize, soya and vegetables. More importantly, GASIP invested in capacity building and training.