MoFA takes delivery of 3,000 motorbikes For distribution to extension officers

The Ministry of Food and Agriculture (MoFA) has taken delivery of 3,000 motorbikes for distribution to agricultural extension officers in the country.

The sector Minister, Dr Owusu Afriyie Akoto, announced this in Sunyani after presenting 100 motorbikes to the Brong Ahafo Regional Directorate of the ministry.

The minister, who made the presentation during his two-day visit to the region last Monday, said MoFA, with support from the Canadian Government, had, within the past six months, also distributed 216 vehicles to agricultural extension directors.

Dr Akoto said the government had also given approval for the recruitment of 2,700 extension officers to offer support to farmers to boost production.

He said the government was determined to increase the number of extension officers and provide them with the requisite tools to reach out to smallholder farmers.

According to the minister, the presentation of the motorbikes and other interventions in the sector by the government were meant to ensure the success of the Planting for Food and Jobs programme.

He said the number of registered farmers under the programme had increased from 200,000 last year to 500,000 this year. 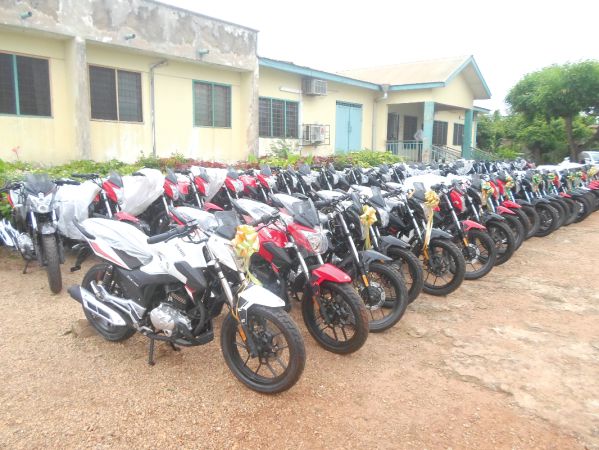 Interacting with poultry and maize farmers and dealers at Wamfie in the Dormaa East District in the Brong Ahafo Region, Dr Akoto promised to construct a poultry processing factory in the area.

He said the government was also constructing about 30 warehouses across the country to enable farmers to store their produce.

The minister, therefore, urged the farmers to work harmoniously together and support one another for increased production.

The Brong Ahafo Regional Minister designate, Mr Evans Opoku-Bobbie, said the region had been active in the implementation of the Planting for Food and Jobs programme.

He expressed the hope that the interest would be translated into increased yields.

For his part, the acting Regional Director of the MoFA, Mr Hassan Donkor, said female participation in agriculture in the region had also improved.

He, however, expressed worry about the late delivery of seeds and the lack of proper storage facilities in most parts of the region.