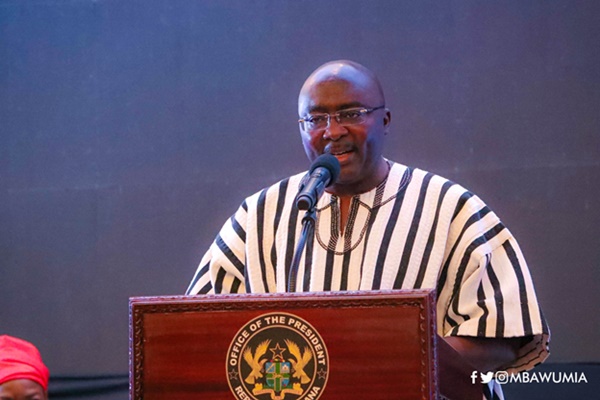 Vice President, Dr. Mahamudu Bawumia, has announced that the Ashanti Region is set to benefit from several monumental infrastructural projects.

He said the Suame Interchange Road Project, which has been on the drawing board for a while, would finally become a reality in September this year.

According to him, the Boankra Inland Port Project would also commence this month.

He continued that the famous Kumasi International Airport project would also be commissioned by President Akufo-Addo this year.

The aforementioned infrastructural projects, he indicated, aside from beautifying the region, would eventually lead to the transformation of the lives of the people.

The Vice President was speaking during the official commissioning of 100km Kumasi Inner Roads Project at Nsenie yesterday.

Significantly, the 100km road project officially started in 2019 after Dr. Bawumia had cut the sod for contractors to start work.

Dr. Bawumia said the government is sharing the national cake with every corner of the country, and Asanteman would surely get its fair share of the projects.

He said the NPP administration has already tackled a number of road projects in the Ashanti Region with the view of boosting the free movement of people and goods.

The Vice President said the government would continue to work on more road projects in the region, saying “the completion of the 100km roads also gives birth to another 100km roads to begin.”

He said the government was determined to work on more road projects in the region, noting that the 100km Syno-Hydro roads project were also ongoing in the region.

The Minister of Roads, Kwasi Amoako-Atta, lauded the contractors for completing the phase-one of the Kumasi inner city roads on the stipulated time.

He admonished the citizenry to take proper care of roads constructed by the government to ensure their longevity, warning against people turning roads into workshops.

The Asakyihene, Nana Mensah Bonsu, who represented Otumfuo, at the event, charged government to complete all pending projects in the region.

He also lauded the government for completing the 100km inner city project as promised, stressing that better roads would lead to rapid development.

Simon Osei Mensah, the Ashanti Regional Minister, called for total support for government to complete all other infrastructural projects in the region.