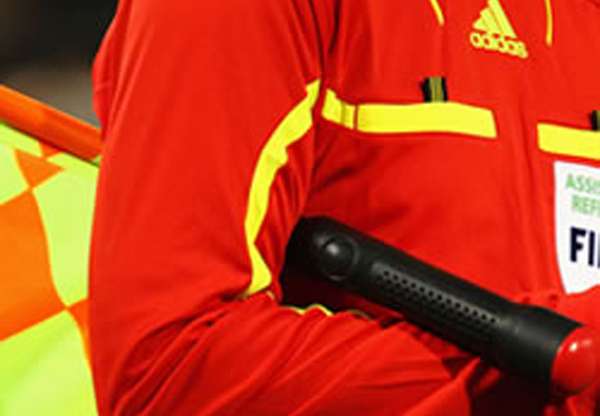 The Match Review panel of the Ghana Football Authority (GFA) has banned three referees and three assistant referees in its decisions on complaints received from some Division One League Clubs.

Below are the decisions taken by the Review panel:

According to the complaint in the first half of the match, Referee Foster Bastiours allowed two players of Tamale City to stand just by the human wall of Steadfast when there was a free-kick which resulted in the equalizer.

Again Steadfast FC claimed that in the 48th minute of the 2nd half, the Referee and Assistant Referee 1 Cletus Azor Azurero disallowed a goal which was scored by Steadfast FC’s Abdul Fatawu Issahaku. They further accused the Referee and the same assistant of waving for play to continue after a player was brought down in the penalty area of Tamale City.

After watching the video recording of the game, the Match review panel observed that the required distance of 1 metre or more could only be determined by the Referee who was closer to the scene. The panel therefore agreed that the goal scored in Steadfast’s first complaint was a good goal.

On the second complaint, the Panel saw that the whole circumference of the ball did not cross the goal line as complained by Steadfast FC.

However, on the third complaint, the Panel observed that there was a clear hand pulling of the attacker of Steadfast FC which should have resulted in a penalty but the referee waved play-on.

The Match Review Panel, therefore, recommended that the Referee Foster Bastiours and Assistant referee Cletus Azor Azurero should be suspended for the rest of the league season for not awarding a clear penalty which affected the outcome of the match.

Bofoakwa Tano complained that in the 16th minute of the 1st half, Assistant Referee 2, Marley Asigbe denied them a clear goal after flagging for offside from a throw in which their striker shot into goal. They added that the shot appeared to have had contact with the Tamale City defender. According to Bofoakwa FC, the disallowed goal subsequently changed the dynamics of the game.

The Match Review panel observed that the ball that was adjudged as offside was from a throw in. According to Law 11 of the Laws of the Game, there is no offside offense if a player receives the ball directly from a throw in, corner kick and goal kick.

The Committee, therefore, decided that due to the poor judgment of Referee Joshua Tengzie affected the outcome of the match and should be suspended for the rest of the season.

Kotoku Royals stated that during the 2nd half of their match against Krystal Palace, player Esmond Nanor was in pain in the stomach due to a challenge. According to the complaint, Referee Caleb Abotsi walked to him to ask him to get up but since the pain severe he called for the medical team for assistance. They claimed that after the treatment, the referee showed the player a yellow card for time-wasting which resulted in a red card because the player has already attracted a yellow card.

The Committee observed after watching the video that Kotoku Royals players resulted to various methods of time-wasting. It also found that the Referee in his determination to make the game flow had no option but to caution players who were guilty of offence of time-wasting.

The Panel, therefore, decided that Caleb Abotsi was right in cautioning the player by showing him the yellow cards.