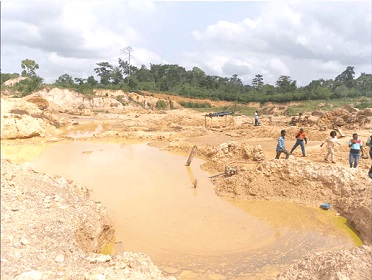 These past few weeks I have had ‘galamsey’ on my mind (did it ever leave, I ask), more urgently because of two short videos making the rounds.

One shows a network of underground tunnels dug in a town which end up in the room of the chief of the town. The other video shows a cocoa farm being dug up and the farm owner stating that this is his farm, he is digging it up for galamsey and he is doing it willingly because he will be better off.

I am taking a look at a pair of beautiful gold earrings that I have and which I treasure very much.

These days I look at this pair of earrings and all other gold jewellery in a different light. I wonder if this beautiful, intricately designed gold chain and all my other gold jewellery started life from a galamsey pit. Was the gold which was used to make the ring on my finger dug up from the pit that has turned the River Pra into the mercury-filled muddy brown mulch that struggles to work its way through what was once a dense forest?

That bejewelled crown on the British Queen’s coffin, how many hectares of virgin land were desecrated, how many miles were dug into the bowls of the earth to find those diamonds on the crown? Does anyone shopping for a diamond ring ever think of the lands from which it was extracted?

It looks as though the more precious, the more expensive, the more rare the minerals are, the more difficult they are to extract from the ground and the more damage that is caused during the process of extraction.

There does not seem to be any clean and easy way of getting precious materials out of the soil, whether it is done by the big mining companies or the small mining enterprises.

The people who live on these lands have been extracting the minerals out of the soil long before the white people arrived in these parts.

Big-scale mining started with the arrival of the foreigners and for years, nobody really checked or asked any questions about the methods they used and there were hardly any considerations about the damage being caused to the environment. The cost of the devastation of the land during the extraction is never factored in the valuation of the minerals.

Up until the 1990s, the small-scale mining by local people was just that – small scale -, and it did not pose much danger to the environment, especially because the methods employed were rudimentary.

But all that changed with the introduction of big and sophisticated machinery into the activity. What used to be almost a romantic, part-time activity by local people was transformed into a full-time, heavy-duty, multi-national, big money operation.

The Chinese discovered we had gold and they arrived.

Suddenly, everything became fair game. There were no sacred forests or hallowed rivers that we worshipped and regarded so reverentially that girls couldn’t cross during their menstrual periods. Any type of waste material or poison could be and was regularly emptied into rivers and water bodies without any anxiety. Galamsey became that important.

Before our very eyes, our thick forests and water bodies were disappearing. President Akufo-Addo, on coming into office, expressed his horror and determined to stop galamsey.

At first sight, the fight appeared such an obviously good thing; who could possibly be against a fight to restore our environment to good health? Surely, everyone wanted our river bodies and forests to be protected?

All the great and the good of Ghanaian society proclaimed their support; leading journalists, CSOs, religious and traditional leaders all claimed to support the fight.

But it turned out the support was half-hearted at best and in fact, disingenuous. The lure of the precious minerals proved too tempting for many people who were exposed to the practice.

The anti-galamsey fight almost cost President Akufo-Addo an election and left his party in turmoil. There were party officials who were engaged in galamsey and did not support the fight to stop it.

The opposition launched an effective underground campaign that if voted into power, they would allow galamsey and set free all those who had been arrested.

Even the security services did not escape unscathed, with police and military contingents sent to enforce the fight being compromised.

The communities in which galamsey was being practised never looked like being convinced it was something they should give up. If they had to choose between making quick money as they hoped to do from galamsey and saving the forest cover for the country, there was no argument, they would dig for gold.

Some of them pointed out that those who were leading the fight against galamsey lived in big towns and cities in areas which, once upon a time, used to have forest cover.

Why should they be expected to give up the opportunity to make money and also build big houses so they would provide forest cover for the rest of us? Indeed, for many anti-galamsey campaigners, their only experience of a forest is as a tourist site and of a river, is to drive on a bridge over a river.

The more outraged we the anti-galamsey campaigners sounded, the more determined they seemed to be to continue. Excavators have been seized and burnt. That sounded dramatic enough but it did not stop galamsey. Big stakeholder meetings and conferences were organised and passionate speeches made; they did not stop galamsey.

Big tunnels have been discovered, dug under houses and on the streets of towns; it turned out the tunnels ended up in the room of the chief of the town. The only people who have been shocked and scandalised are we in the fancy parts of the big cities.

Surely, only a gang of foreign mercenaries would dig up the cocoa farms of the poor farmers; here we have a farmer on camera, telling us he is digging up his own cocoa farm for galamsey.

Maybe we can tell him ever so quietly that according to the Constitution of the country, the land on which he has the farm might be his, but the minerals underneath the land do not belong to him but to the government. My suspicion is he wouldn’t be impressed in the least bit.

Maybe we should be looking elsewhere for the answer to the problem.

I have been wondering what I will do if I go in my garden tomorrow and discover a piece of diamond in the ground where the dahlias are; will I dig up my garden or keep the beautiful lawn undisturbed to protect the environment?

Would a label on a piece of the jewellery stating how many water bodies were destroyed to manufacture it, make the piece less attractive, I wonder.